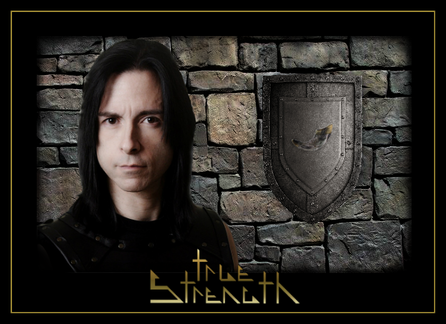 True Strength is a Heavy Metal band from the US that formed back in 2012 by guitarist-Ryan Darnell & percussionist-Chris Clark. True Strength takes the idea for their band's name from Psalm 118:14 "The Lord is my strength and my defense; he has become my salvation."
​       True Strength now has a number of albums to their credit. In 2014 the band released their debut independent full-length album titled 'The Cross Will Always Prevail'. Then in 2016, True Strength went back into the studio and released their full-length sophomore album titled 'Steel Evangelist'. In 2019 True Strength showed no signs of stopping with the release of their third full-length album titled 'Sanguinary Vivification'.
"If you have not accepted Jesus Christ as your Lord and Savior, the time do so is now!
Time is getting short, the shadows of the day are getting longer and the times are getting perilous.
Secure your Eternal Salvation today by trusting in and living for Jesus Christ, He is the Way,
the Truth and the Life, nobody goes to the Father except through Him! God Bless You All!" - Ryan Darnell 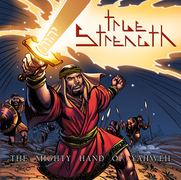 2020
In 2020 True Strength released their fourth full-length studio album titled 'The Mighty Hand of Yahweh' on Roxx Records. The album was produced and mixed by Joshua DeHaan and the late Walt DeHaan-former manager of 'Winger', who died during the production of the album. 'The Mighty Hand of Yahweh' features the artwork of legendary comic book artist-Sergio Cariello(The Action Bible, Marvel, DC Comics) along with some additional help from Scott Waters. The album's executive producer was Bill Bafford with the executive audio engineer being Josh DeHaan. The album was produced & mixed by Josh DeHaan who received additional help from assistant producer Walt DeHaan. The recording engineer was Justin Long and mastering was handled by Rob Colwell of Bombworks Sound.
With the release of 'The Mighty Hand of Yahweh' True Strength has produced their strongest album to date. This release finds the band moving away from the Power Metal genre and into the Heavy Metal/Neoclassical Metal realm. The guitar work here is leaning more towards traditional Metal styles along with the inclusion of some Classical Music instruments like the Viola, Violin, Flute, and Cello.
So the question at hand is how does 'The Mighty Hand of Yahweh' stand up to the band's 2019 release 'Sanguinary Vivification'? The Mighty Hand Of Yahweh is a lot more smoother with no areas sounding forced. The tracks are given opportunities to breathe with plenty of guitar solos interjected. With 'Sanguinary Vivification' the tracks have a long running time with many of the songs being pack with a bit too much lyrical information with the potential of leaving the listener exhausted after hearing the entire album. An argument could even be made that the vocalist was often found struggling to get all the information out on a few of the tracks. However, this problem was rectified on the band's 2020 release where the songs have a shorter running time with just the right amount of lyrical content add to each and every track.
​        In further comparisons to the band's 2019 release, 'The Mighty Hand of Yahweh' features a much stronger vocal performance from frontman-George Tsalikis(Zandelle). Here we find Tsalikis doing an impressive job of taking risks and pushing himself to levels we haven't seen before and is often found releasing some high screams not unlike vocalist-Michael Sweet(Stryper). In addition, Tsalikis offers up more hooks and energy than ever capturing and drawing the listener into the arrangements. There also seems to be a stronger backing vocal presence throughout this recording adding more excitement and energy as well.
For the most part, the production on this latest release sounds really good. However, there are 3 songs(tracks-4,5,6) which all come across as sounding a bit unclear in there musical arrangements. I'm not sure who is to blame here. Was the musical arrangements poorly recorded or was this the fought of the production crew and mastering? Ryan Darnell sheds some light on the situation: "I definitely can hear where those songs are muddier, and I think the reason was not mastering on those but rather the fact that we packed those songs with too many layers, which is causing muddiness. Interestingly 4 and 6 have a live cello following the rhythm guitar in parts, I am wondering if the addition is causing it to become less defined? I think 5’s problem is with an effect the producer put on my main rhythm guitar (it was a live amplifier mod), which added modulated/simulated dither or noise to give it a “real amp being recorded with a mic” feel." With that said, on this release the majority of the song's sound great with the quality of production they were given.
'The Mighty Hand Of Yahweh' is a concept album with the lyrics of each track conveying the
biblical stories of Joshua and the children of Israel ​from entering the
promised land to the different battles and events that they were faced with therein.
​The lyrics derive from actual scripture found in the Book of Joshua.
"Joshua"
Crossing the Jordan with divine help they knew
The Lord would deliver them soon!
The arrival of Israel was now drawing near
The hearts of their enemies melting with fear!

No one will be able to stand against you!
As in the desert with Moses, I will be with you
Be strong and courageous, and you will lead them to their land!
The land that I had sworn that I would give to them!


"The Sun Stands Still Upon Gibeon"
Gibeon pled Joshua to protect them from the attack
After an all-night march from Gilgal, Joshua struck them in the back
On the road down from Beth Horon to Azekah they began to flee
The Lord hurled large hail down upon the armies of the kings

"Sun, stand still over Gibeon,
And you, moon, over the Valley of Aijalon.”


"Rest from War"
After dividing the land, the inheritance of the Tribes
Joshua prepared to go the way of the Earth
A nation now born; the promise of Yahweh fulfilled
A tired people can now call this place their home

He said:
"Now fear the Lord and serve Him, throw away the gods of your past
If serving God doesn’t suit you, choose this day whom you’ll serve"

(See Site Info for Sword Scale meaning)
True Strength formed with the mission of honoring God, spreading the Gospel of Jesus Christ, and donating 100% of their sales to charity. Let's help the band continue their mission by supporting their latest release 'The Mighty Hand of Yahweh'. This is a solid offering which should be in every Metal fan's collection around the world! Also, don't forget to check out the interview I had with the band.
Musicians:
George Tsalikis(Zandelle) - Lead Vocals
Ryan “The Archangel” Darnell - Rhythm Guitar, Bass
Takis Koroneos - Lead Guitar
Chris Lee Faulkenberry - Drums & Percussion, Narration on Track # 1
Marco “Mark” Bravi - Keyboards