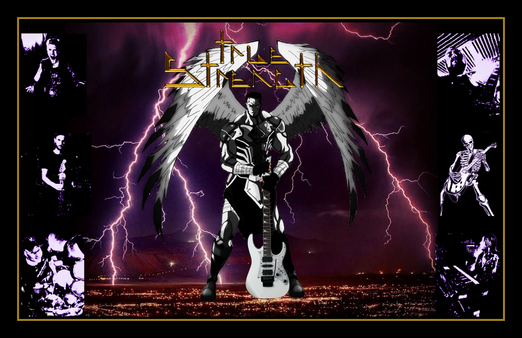 True Strength is a Power Metal/Heavy Metal band from the US that saw its conception back in 2012 by guitarist-Ryan Darnell & drummer-Chris Clark. True Strength takes the idea for their band's moniker from Psalm 118:14 "The Lord is my strength and my defense; he has become my salvation."
​       Over the past 10 years, True Strength has been very active and now has a number of albums to their credit. In 2014 the band released their debut independent full-length album titled 'The Cross Will Always Prevail'. Then in 2016, True Strength returned to the studio and recorded their follow-up album titled 'Steel Evangelist'. In 2019 True Strength showed no signs of stopping with the release of their third full-length studio album titled 'Sanguinary Vivification'. In 2020 True Strength released their fourth full-length studio album titled 'The Mighty Hand of Yahweh' and signed on for the first time with the Roxx Records Label.
"We give our undying thanks to Our Lord and Savior Jesus Christ, God the Father and the Holy Spirit."
Not long after the publication of their 2020 release, True Strength, once again, darkened the studio doors to begin work on material for a new album. 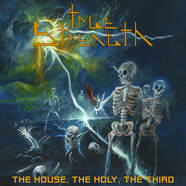 2022
In 2022 True Strength released their 5th full-length studio album titled 'The House, The Holy, The Third' on Roxx Records. The album was produced & Mixed by Josh DeHaan and executive produced by Bill Bafford.
Mastering was handled by Rob Colwell of Bombworks Sound. ​All Music was written by Ryan “The Archangel” Darnell and True Strength. The album's cover features artwork by renowned comic book artist-Ward Silverman(Topps Comics, Star Wars). Additional album cover edits were done by both Josh DeHaan & Scott Waters. 'The House, The Holy, The Third' is dedicated to Michael Bloodgood, and Oz Fox(Stryper).
'THTHTT' is a concept album with all song expressing themes and events written in the Bible within the book of Ezekiel. The meaning behind the album's title - 'The House, The Holy, The Third' was taken from John 2:19 "Jesus answered them, “Destroy this temple, and in three days I will raise it up.” The band further explains: "I fell in love with the name after seeing the term used in a biblical commentary about John 2:19 (the author’s name escapes me); but in short it was used to describe the Temple of Ezekiel’s vision as being connected to the Body of Christ. Originally this album was going to be called “The Destruction of Gog and Magog” until I saw “The House, The Holy, The Third” which I thought sounded more epic."  - Ryan Darnell -
With this 2022 release, the band has prepared a feast for Melodic Metal fans alike. The band's arrangements include not just Power Metal offerings but also Heavy Metal all in the veins of Queensrÿche. The only change to the band's line-up to report, comes by way of Marco Bravi being replaced by keyboardist-Carl "Boanerges" Borsick. True Strength's complete roster is comprised of lead vocalist-George Tsalikis(Zandelle), lead guitarist-Takis Koroneos, rhythm guitarist/bassist-Ryan “The Archangel” Darnell, keyboardist-​Carl "Boanerges" Borsick, and drummer-Chris Lee Faulkenberry-Alfano. The guest musicians include violinist-Irina Markevich and narrator-Steve McCurdy on track-1.
The tracks that stand out on this latest release include 2.Chariot of God  3.Ezekiel's Call 4.Dwelling of Abominations  5.Harlot Bride  6.Mourn Not the Delight of Your Eyes  8.“The City Has Fallen/587 B.C.  9.The Lord Will Be Israel's Shepherd(Instrumental)  10.Valley of Dry Bones  11.Destruction of Gog and Magog  12.The House, The Holy, The Third.
The Lead vocalists for the band is none other than George Tsalikis who is known for his work with the Power Metal outfit 'Zandelle'. This is Tsalikis' 3rd album singing as frontman for True Strength. On this latest release, Tsalikis delivers up a performance that will not soon be forgotten. Tsalikis' vocal styles here are slightly varied from track to track giving the listener some additional surprises along the way.
The guitar section is comprised of Takis Koroneos on lead guitars & Ryan “The Archangel” Darnell on rhythm guitars. The guitar work really stands out on this project drawing from the 80's Metal scene. Throughout this release, both Takis & Ryan do a great job of allowing each song to breathe with some well placed timely solos.
Our guitarists are given a chance to shine not only on the many solos but also on the instrumental track-9 "The Lord Will be Israel's Shepherd". On this track both Takis & Darnell are allowed the opportunity to flex their muscle under the spotlight. ​All lead guitar solos were written by Takis Koroneos...
The album's lyrics are all taken directly from scripture
​found in the book of Ezekiel as one can see in the following excerpts:
(All lyrics were written by Ryan “The Archangel” Darnell and George Tsalikis)
​
"Chariot of God"
(Ezekiel 1:22-28)​
I saw four wheels on the ground by each creature
Sparkling like topaz and covered in eyes!
A vault of crystal above the Four Living Creatures
And under their wings were stretched high!
Above the vault, a throne of lapis lazuli
And on it a figure like a man!
Above the waist he looked like glowing metal
Below he was clothed in fire and light!


"Dwelling of Abominations"
(Ezekiel 8)
Ezekiel was brought by the Spirit
Between Heaven and Earth in visions
To the Temple that stood in Jerusalem
In the Temple there were idols
And through the walls he’d witnessed
The seventy elders of Israel worshipping them!


"Mourn Not the Delight of Your Eyes"​
(Ezekiel 24:15-27)
The word of the Lord came to me...
I’ll desecrate my sanctuary.
The stronghold in which you take pride in,
The delight of your eyes, you shall not mourn.

Do not mourn the delight of your eyes
I will take away your heart's desire!


"The City Has Fallen / 587 B.C."
​(Ezekiel 33:21-33)
The night before, the prophet’s mouth was opened
No longer silent, for the Word of God came to him:
'You eat meat with the blood and look to your idols, should you possess the land?'
‘You rely on your sword, do detestable things, and defile your neighbor’s wife.’

Then came a man who fled Jerusalem…
Dread dripped from his lips
Hear the poor survivor’s cry!


"Valley of Dry Bones"
(Ezekiel 37)
​The hand of The Lord came upon me
And brought me out by the Spirit of God
He set me down in the midst of a valley
A valley that was filled with bones
He caused me to pass by all of them
There were many and were all very dry
He asked me if these bones could live again
So, I answered that He knew better than I
Son of man PROPHESY
PROPHESY to the bones
Son of man PROPHESY
PROPHESY to the bones
“Prophesy to these bones and say to them,
‘Dry bones, hear the word of the Lord!'"
When flesh and breath give you life again
"Then you will know that I am the Lord."


"Destruction of Gog and Magog"
(Ezekiel 38 & 39)
Set your face against Gog, of the land of Magog, the chief prince of Meshek and Tubal.
Prophesy against him and as the Sovereign Lord says you’ll declare “it is I against you,”
I will turn you around, put hooks in your jaws and with your whole army I’ll bring you out
—your horses, and horsemen they are fully armed, a great horde with shields large and small,

...all of them brandishing swords.
Persia, Cush and Put are with them,
—the many nations with you.
Get ready; be prepared!

'When Gog attacks- the land of Israel,
my anger will be aroused!
In my zeal and fiery wrath
I declare that the Earth will quake!
Every creature will tremble that day,
the mountains will be overturned!
I will make myself known to the nations.
Then they will know that I am the Lord.’

"If you have not accepted Jesus Christ as your Lord and Savior, the time to do so is now!
Time is getting short, the shadows of the day are getting longer and the times are getting perilous.
Secure your Eternal Salvation today by trusting in and living for Jesus Christ, He is the Way, the Truth
and the Life, nobody goes to the Father except through Him! God Bless You All!" - True Strength -

(See Site Info for Sword Scale meaning)
With their latest release 'The House, The Holy, The Third', True Strength has proven they are here to stay.  True Strength is for fans of Queensrÿche, Sacred Warrior, Iron Maiden, Bloodgood, Freedom Call, and Kamelot. If you are looking for some new Power Metal to add to your collection then look no further than True Strength's 2022 recording 'The House, The Holy, The Third'! If I was going to purchase only one album this month then I would make this album that purchase because it's just that good! Help support the band and Christian Metal music by picking up your copy today!
​*True Strength's 'The House, The Holy, The Third' to be released
June 3rd, 2022 in both CD and digital format via Roxx Records!
Purchases can be made at any of the following links:
Roxx Records
Merch
Musicians:
George Tsalikis(Zandelle) - Lead Vocals
​Takis Koroneos - Lead Guitars
Ryan “The Archangel” Darnell - Rhythm Guitars, Bass
​Carl "Boanerges" Borsick - Keyboards
Chris Lee Faulkenberry - Drums & Percussion