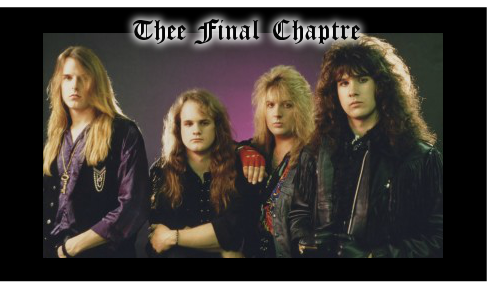 'Thee Final Chaptre' hails from New Orleans, LA where they formed back in 1989 when Guitarist Gary Wilson decided to pull together a new and more intense line-up of skilled musicians. The new band began performing covers of other bands along with some original material at local bars eventually landing a solid lineup consisting of Frontman-Andrew "Tripp" Whittington, Guitars-Gary Wilson, Bassist-Paul Starnes, and Drummer-David Osbourn. 'Thee Final Chaptre' deliveres up 80's style Power Metal that draws comparisons to such Metal bands as Queensryche, Recon, Stryper, Sacred Warrior, and Iron Maiden.
​       In 1991, the band's tight arrangements landed them a deal with WEI Records which resulted in the release of their 6-track cassette titled 'It Is Written'. With the release of 'It Is Written', the band exploded onto the Metal scene capturing the interest of Polygram subsidiary Jaguar Records. However, due to poor management, limited touring opportunities, and the Grunge scene taking over, the band had broken up just before the end of 1992. 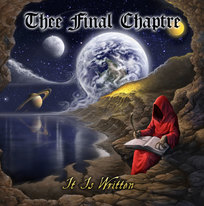 1991/2016
​       Celebrating the 25th anniversary of the original cassette release through WEI, In 2016, Divebomb Records announced, the expanded deluxe edition of Thee Final Chaptre's 1991 'It Is Written' release. For the first time ever on CD and Sourced directly from the DAT master, the album has been digitally remastered by Jamie King along with nine previously unreleased live bonus tracks. This limited collectors edition is packaged with updated cover art by Steven Cobb, a 16 page booklet with archival photographs straight from the band, and an all-new interview with founder Gary Wilson conducted by Olaf Becker. The Layout/Restoration was managed by Adam Peterson.
I must say, the updated cover art by Steven Cobb immediately captures your attention drawing one into this ground breaking project. Upon listening to this expanded edition, one will find the band's original 6-tracks at the beginning of the CD. These 6-tracks are as follows: 1. Day After Day 2. The Key 3. The Hallowed Hymn
4. Come As You Are 5. All For One 6. Don’t Let It Run You Down (Thunder Trilogy, Part I).  Following the original 6 are 10 bonus tracks not previously released to the public: ​7. Just A Memory (Demo), 8. Blood In The Sand (Live), 9. Insane (Live), 10. Wisdom’s Call (Live), 11. Whisper To Scream (Live), 12. Edge Of Sadness (Live), 13. Just A Memory (Live), 14. Bullet In The Chamber (Live), 15. Armageddon (Live), 16. Black Rain (Live). As noted, one of the bonus tracks is a demo and the rest were recorded live. I have to give props to Divebomb Records for their work on this compilation in that they didn't decide to put repeat live tracks of the original 6 tracks. This allows the listener to enjoy some additional tunes not originally released without the listening experience becoming repetitive. 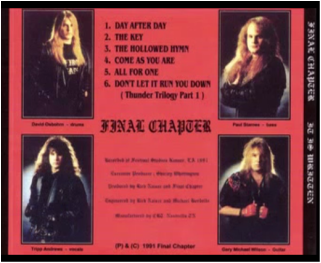 Andrew "Tripp" Whittington is the Vocalist for Thee Final Chaptre and has a very capable vocal delivery. His powerful soaring vocals come complete with an uncanny ability to hit extremely high notes much like Michael Sweet(Stryper), Rey Parra(Sacred Warrior), or even Vett Roberts(Recon). One thing that draws you into the music is Andrew's ability to inject plenty of 80's era attitude pushing this CD to the next level. In various areas on the tune "All For One"- I couldn't help but notice the similarities between Andrew's vocals and that of Axl Rose(Guns N' Roses).
When it comes to the guitar work of Gary Wilson, the shred takes us on a driving Power Metal approach lightly seasoned with Thrash Metal riffs. Gary knows his way around 6 strings and is given many opportunities to shine as he shows just what a fret board is capable of. In order to obtain a tighter sound with a duo guitar assault, Gary did a layering process called overdubbing which makes up for the absence of a second guitarist. Those into acoustic guitar play haven't been left out because you will find some softer sections where Gary unplugs for a while.
The Percussion team is made up of Bassist-Paul Starnes and Drummer-David Osbourn. Paul Starnes refuses to hide in the background as he adds his terminator Bass lines. David Osbourn shreds the kit to pieces while slamming the hammer down on the skins and often pushes the pedal to the metal with his double bass pedal.
The following is from an interview by Olaf Becker
Olaf Becker questioned: "What were your ideas behind the lyrics? Was there a kind of concept behind the whole release? Maybe you can share the inspiration behind the different songs a little bit?"
​Guitarist-Gary Wilson responds: "Lyrically the songs were written through my casual observation of life and my walk (regardless of how crooked) with Jesus Christ. I’ve never called myself a “lyricist,” but a musician and a composer. However, there have been some very dark times in my life where my faith came into question—not only by others, but by myself as well. I did a lot of praying, seeking of wisdom, and looking for answers. I had gotten into much debate with church pastors and theologians. I had even left the church and youth group I grew up in, because I felt like I was being made to feel like an outcast! It was with the wisdom and discernment of our new (at the time) music minister and youth pastor, who prayed with me and began to help me see gifts from the Holy Spirit that I had not recognized. I became spirit-filled and my hands began to tremble and shake as I put pen to paper, and by the end, when “The Hallowed Hymn” was written, all I could do was break down and weep. I was emotionally drained! That song is very personal and introspective as to how I turned my backslidden life around and learned to put God first above all else, least not myself... Tripp and Dave contributed to the lyrics on “Day After Day.” We are only promised one day at a time. “The Key” was co-written by Don Williams and Troy Marks. The Bible teaches us that Christ is the way, the truth, and the life, and that no man shall enter the kingdom without him. Christ really is the key to life. When he stands and knocks at your heart’s door, will you use your key and let him in? “Come as You Are” is simply an altar call at full volume, inspired by visions that were given to us by the Father, as he loves each and every one of his children and will accept you as you are. “All for One”: “One nation under God, indivisible, with liberty and justice for all.” This is what this great nation of ours needs to get back to being. It’s a worldwide call for unity, like the old saying, “Can’t we all just get along?” “Don’t Let it Run You Down (Thunder Trilogy Part One)” is a message that the King shall return. He left as a lamb, but he will return as a lion! No one will know the day or the hour, but know that his wrath will be like thunder. The trumpets will sound... are you ready?"
"The Hallowed Hymn"
​It seems like life is ending
The final curtain falls
Feel yourself descending
No place to hide at all
The door slams behind you
A chill runs down your spine
You just don’t know what to do
But in the end, what will you find
Life will be forever a gem
If you only follow him
The sky darkens suddenly
But do you know why
The word spells it clearly
So seek and ye shall find
Don’t listen to the Evil One
Or the wrath that has settled in
Listen to the Righteous One
Accept the life He has given
The Saviour speaks right through me now
To the King I humbly bow
Yeah, people listen to my song
And heed every word I say
Accept the One who died for you
And forever praise His name
Death no longer invades you
If you’ve accepted His holy name
No more of the lies to live
But the truth from here on in
Your new life’s beginning
There is no end at all
Feel yourself ascending
At the gates you wait for his call
The Saviour speaks right through you now
To the king we humbly bow
This hallowed hymn 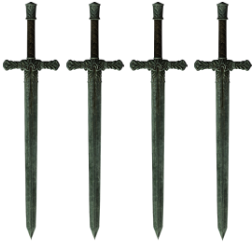 (See Site Info for Sword Scale meaning)
'It Is Written' is a solid project and an instant classic that finally can be enjoyed by Metalers around the world. If you are like me and your collection always welcomes new material then pick up a copy of this deluxe edition by Thee Final Chaptre and let the magic of the 80's come to life once more. This is a limited collectors edition so put this one on your very soon to do list. You can purchase 'It Is Written' direct from Divebomb Records at the following link: tribunalrecords.bigcartel.com/product/thee-final-chaptre-it-is-written-deluxe-edition
Musicians:
​​Andrew "Tripp" Whittington-Vocals
Gary Michael Wilson-Guitars
​Paul Starnes-Bass
David Osbourn-Drums
(The music video displays the original cover art)