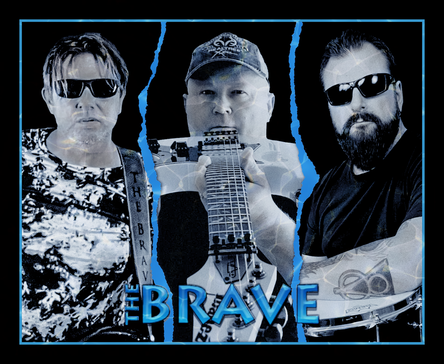 The Brave is an Arena Rock band from California that formed back in 1991 by both Stayce Roberts & Malcolm Paris. The band's name was fitting do to the fact that they were playing in the Hollywood club scene and bravely preaching the message of Jesus Christ boldly to whoever would listen. In 1992 The Brave released their debut full-length album titled 'Battle Cries' on Pakaderm Records. The album went on to receive rave reviews throughout the Christian Rock & Metal community. Just two years later, in 1994 The Brave followed up with the release of their sophomore full-length studio album simply titled 'Trust' on Pakaderm Records. This release saw a change to the line-up with James Salters being replaced by vocalist-Randy Roberts. Unfortunately, after The Brave released their sophomore album they went on hiatus and the band was no longer heard from.
It wasn't until 2014, twenty years after their 1994 album, that we would hear from The Brave again. In 2014 The Brave released their third full-length studio album titled 'Rise' which was, in part, a reimagined compilation project. 'Rise' features 12-tracks with 3-tracks taken from 'Battle Cries' and 3-tracks taken from 'Trust', along with 6 completely new tracks. With this release, the band introduces a new member to the group, a female lead vocalist going by the name Amanda Z. With this 2014 release, the band trades in their Arena Rock sound for more of a Melodic Hard Rock sound.
After the release of 'Rise', the band went on a 7-year hiatus and once again leaving fans to wonder if they would ever hear from this California based band again... However, in 2021 The Brave returned to the Rock scene with the release of their fourth full-length studio album titled 'Evie's Little Garden' on Bravemusic. This release would prove to be no exception to the rule as the band's roster included a new lead vocalist. This time around, the band didn't have to look any further than their already existing line-up. The Brave's new lead vocalist would come from in-house by founding member-Stayce Roberts who was the band's lead guitarist. 'Evie's Little Garden' would prove to be one of the band's strongest albums to date receiving rave reviews from around the world.
Members of The Brave have been influenced by a number of bands throughout the years including Journey, Night Ranger, Styx, Boston, KISS, Bon Jovi, Loverboy, Aerosmith, Def Leppard, Iron Maiden, Van Halen, Led Zeppelin, Tower of Power, Country, and Kings X.
​       After the release of 'Evie's Little Garden', The Brave showed no sign of slowing down when they darkened the studio doors to begin work on material for a new studio project. 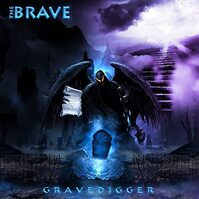 2022
In 2022 The Brave released their 5th full-length studio album titled 'Gravedigger' on the band's indie label BraveMusic. 'Gravedigger' is a solid follow-up album to their 2021 release with top of the line production. The album was produced & engineered by Stayce Roberts. The recording was Mixed by J.R. McNeely and mastered by Brad Blackwood at Euphonics Mastering. 'Gravedigger' saw the return of lead vocalist/guitarist-Stayce Roberts, bassist-Malcolm "Groove" Paris, and percussionist-John "The Beast" Spittle on drums. So the question at hand is how does this release measure up to the band's critically acclaimed "Stayce fronted" 2021 release? Well, 'Evie's Little Garden' delivered up straight forward Arena Rock while 'Gravedigger' takes a different approach and mixes things up a bit. 'Gravedigger' features tracks that are straight shooter Arena Rock 80's style songs while their are a few other tracks featured that combine both Arena Rock & Groove together. Then there are a few tracks that lean more towards the Groove side of the tracks. Yeah this release shows a band not abandoning their roots yet expanding their wings and carrying the listener into new territory with a little more genre diversity.
The track-list for 'Gravedigger' includes 1.Gravedigger 2.Bad Day 3.BraveNation 4.Eternal 5.Ghosts  6.Temples 7.Alive 8.Heaven Knows 9.Someone's Watching Over Me 10.Love Is The Only Place 11.The Undertaker 12.AfterLife 13.Strange New World
Vocalist-Stacey Roberts once again does a stand up job as frontman on this latest project. Stacey helps bring each and every song to life while interjecting plenty of energy & hooks throughout this recording. 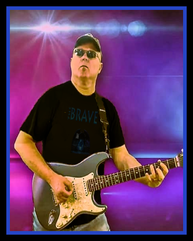 Shredder-Stayce Roberts handles all guitars for the band and offers up some tasty licks on this latest project. Stacey draws from the 80's bag of tricks to light things up from track to track with electrifying riffs...
​Bassist-Malcolm Paris keeps things groovin' and heavy while drummer-John Spittle brings the hammer down and unloads on this 2022 album.
Lyrics are evangelical and overtly Christ centered as one can see in the following excerpts:
"BraveNation"
Cities burn and evil yearns to tear our freedom down
The time has come to raise our voice – we know who wears the crown – S ing it!
Jesus – Son of God how’d we get so lonely
You are the Living Word – You are my one and only
Jesus – King of Kings – Lord of my salvation
One Name lifted up – the God of every nation


"Alive"
Where can we run and who can we turn to
When everything seems so wrong
Where can you run and who are you gonna turn to
Who’s gonna show you the way
Down through the ages it’s been written in The Pages
Of a Man who was crucified
And only through Jesus who died to redeem us
Can our spirit be glorified
So put your faith in The One – God’s Holy Son
And everyone will want to know
What’s that look in your eyes?
And you can tell them it’s Jesus who’s turned your life around

(See Site Info for Sword Scale meaning)
The Brave is for fans of bands like Def Leppard, Whitesnake, and Van Halen. Once again, The Brave has delivered up a solid package that should be in every Arena Rock fan's collection. Help support the band and Christian Rock music by procuring your copy of 'Gravedigger' today!
Purchases can be made at any of the following links:
Discogs
Amazon
iTunes
Musicians:
Stayce Roberts - Lead Vocals, Guitars, Keys
Malcolm "Groove" Paris - Bass
John "The Beast" Spittle - Drums