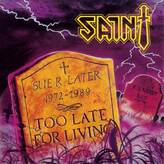 1988
One of Saint's strongest offerings was released by the band in 1988 and was titled 'Too Late For Living' on Pure Metal Records. This release is a Metal feast featuring vocalist-Josh Kramer at the top of his game behind the mic and delivering up one of his best performances. Josh is supported by guitarist-Dee Harrington, bassist-Richard Lynch, and drummer-John Perrine. 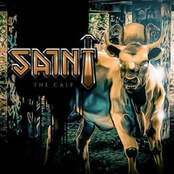 2019
In 2019 Saint returned to the Metal scene with the release of their 13th studio album titled 'The Calf' on Armor Records. ​With their latest release we find that vocalist-Brian Miller, who fronted the band on their previous 2014 release-'Broad Is The Gate', has been replaced by Vocalist-Dave Nelson. Now if you are expecting Nelson's vocal style to follow in the footsteps of Brian Miller or even Josh Kramer then you are going to be sorely disappointed. Dave Nelson's delivery brings to the table a strong solid vocal performance that can stand up to any band within the same genre. Nelson delivers up enough grit, hooks, and energy to help push this Metal offering over the top. With the addition of frontman-Dave Nelson to the line-up, this album helps to unite the traditional Saint Metal arrangements with a new modern day Saint sound.

The guitar section is managed from a duo approach by long time guitarist-Jerry Johnson along with returning guitarist-Matthew P Smith. Johnson and Smith's guitar work is both melodic and driving in nature as it helps propel the songs forward from track to track. In addition, the guitar department offers up some memorial solos for all you guitar enthusiasts out there.
Featured on bass is original & longtime member-Richard Lynch who continues to deliver up some killer bass lines for the band just as he did in the band's conception.
​       The drum work of percussionist-Jared Knowland makes its presence known on this release. I can imagine that after his studio recording sessions, he took a well deserved break to recover.
The band's lyrics are thought provoking and Christ centered
​as one can see in the following lyric excerpts:
"Rise"​
Scream! From The Mountaintop walk me down by the river
King! I wear the crown of thorns your Salvation I will deliver
Shine! I am the Light I’m the sign of the apocalypse
Rise! From the gutter we will disappear forever

Weakness inside of me, my path reveals my history
Always convinced I'll find my way
But You are the one I need You've shown me so convincingly
A fool can't wait another day 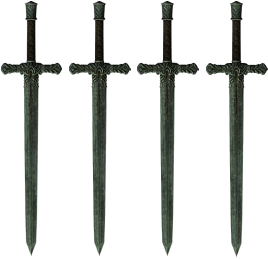 (See Site Info for Sword Scale meaning)
Saint is one of the early pioneer bands of Christian Metal with their roots dating back to the early 80's. Over the years their sound has evolved with the band having recorded some successful albums and gained a respectable position in the Metal community. Let's help Saint continue to be able to offer up albums in the future by supporting them today.
Purchases can be made at any of the following links:
cdbaby
iTunes
discogs
Musicians:
Dave Nelson - Vocals
Jerry Johnson - Guitars
Matthew P Smith - Guitars
Richard Lynch - Bass
Jared Knowland - Drums