REBORN is a 3-piece Thrash/Speed Metal band from São Paulo, Brazil that formed back in 1996 by lead vocalist/bassist-Eduardo, guitarist-Eliezer, and drummer-​Hugo. Brazil has a big Metal scene that is still growing today including bands like Arnion, Dragon's Cry,  Fearless, Prelúdio X, FIRE, and Crossrock just to mention a few.
REBORN has a Thrash/Speed Metal sound that draws comparison to old school Thrash bands like Slayer, Mad Dragzter, Ultimatum, and Deliverance. After their conception, REBORN began working on material for a demo recording. In 1999 REBORN recorded their independent 4-track demo titled 'Blood of Innocents'. The band's demo recording track-list included 1.Consummated 2.Blood of Innocents 3.Apocalipse Day 4.Chaos Existence.
In April of 2000, Reborn played at the 'Zadoque Inaugural Fest' in São Paulo which was recorded on VHS by Zadoque Extreme Productions. This rare video finds REBORN performing along side bands like Sulphur Storm, Foco Nocivo, Satan's Doom, Theosophy, Ressureição, and Antidemon.
Not long after recording their demo, the band got to work on creating new material for a full-length studio album. 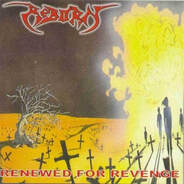 2003
In 2003 REBORN released their debut full-length studio album titled 'Renewed for Revenge' on an indie label. The band's debut recording track-list included 1.Renewed For Revenge 2.Inharmonic Peace 3.Blood of Innocents 4.Regeneration 5.Rotten Religion 6.The Time of Apocalipse 7.Theater of Genocide 8.Slave of Darkness 9.It's Over. The production on this debut project is really good and sounds as if the band had brought on or hired a professional producer along with someone knowledgeable in the mixing department. 'Renewed for Revenge' is a rare gem making it difficult to procure a copy of this classic Thrash recording. Hopefully this release will be picked up by the radar of some label that can help reissue this album and get it into the hands of Thrash Metal fans. It would be nice if there was more info out there about this band & there album however, that's just not the case here.
Eduardo takes front and center as the band's lead vocalist. Eduardo vocals are old-school brutal and work nicely with the Thrash Metal genre. There are moments when his delivery brings to mind singers like Tiago Torres(Mad Dragzter), Tom Araya(Slayer), or even Scott Waters(Ultimatum).
Lyrics are unabashedly Christ centered and evangelical as one can see in the following excerpts:
"Renewed for Revenge"
Ferocious wolves, mercenary and thieves, sources of religion
Perverting the gospel of Christ
Even if we or an angel from heaven should Preach another
Gospel, let him be condemned
" I am the Way, I am the Truth and I am the Life"
Jesus the good shepherd
No one goes to the father except through him
The gate for the sheep
The truth that set you free.


"Inharmonic Peace"
To this world that lies in evil there's a one solution
Jesus Christ the prince of peace - the rejected Stone
The corner stone the builders rejected - inexcusable
I can't imagine all the people living in harmony
In the peace of this world.


"Blood of Innocents"
Blood of innocents
Draining through the hands

We are justified by his mercy

Not by works of righteousness which we have done
But according to his mercy he saved us, by the washing
Of regeneration and renewing of the Holy Spirit which
He shed on us through Jesus Christ our savior
Our savior
Your savior


"The Time of Apocalipse"​
Final judgment, earthquakes, voices, screams
Thunder and lightning
At the time of the total Armageddon
Terrible visions-before the eyes the heavens
Surprising unbelievers and believers
Bent knees
On the great day of the Lord
Blood moon, darkened sun
The stars falling from the sky
The return of the Lord

(See Site Info for Sword Scale meaning)
REBORN is for fans of Slayer, Mad Dragzter, Ultimatum, and Deliverance. If you are looking to form a mosh pit in your living room, your companies breakroom, or your backyard but are lacking the proper Thrash Metal to get the pit warmed up then look no further than REBORN's 2003 release 'Renewed for Revenge'.
(There are some online places where one can download this album for free)
Musicians:
Eduardo - Vocals, Bass
Eliezer - Guitars (lead)
​Hugo - Drums