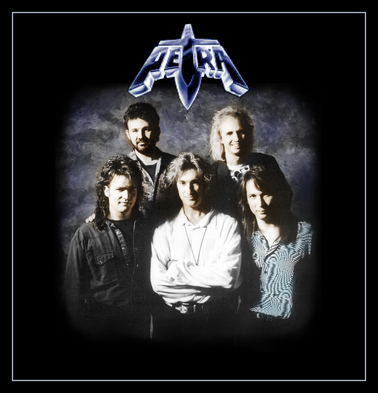 "I remember back in 1987 giving my life to the Lord and being saved. It was at that time that I became friends with a guy from my church named Darren Jamison. Darren was really into the Christian Rock scene and had a substantial collection of albums on cassette format. Darren started bringing and introducing me to all kinds of bands with the first being none other than Petra. I now had in my hand a cassette recording of Petra's 1987 album 'This Means War'. After listening to the album, I became a huge fan and it wasn't long before Darren invited me to go with a group of guys to see the band while they were still on their 'This Means War' tour. It was an incredible concert by a incredible band. After listening to their music and having gone to their concert, this sparked a huge interest in me for Christian Rock music." - Jacob Folk(The Reviewer) -
​       Petra is a Melodic Rock band that formed back in 1972 while guitarist-Bob Hartman was in Fort Wayne attending a Christian Training Center. During his time at the Center, Bob recruited a few classmates including vocalist/guitarist-Greg Hough, bassist-John DeGroff, & drummer-Bill Glover to form the line-up for a new band called Petra. Not long after forming, the band started playing in local venues around the Fort Wayne area such as churches, coffeehouses, and parks. Petra takes the idea for their band's name from the Greek word Petros meaning a rock.
In 1973 Petra darkened the doors of Milam Studios to begin work on material for their debut album. In 1974 Petra released their full-length studio self-titled debut album on Myrhh Records. The band was comprised of members Bob Hartman-lead vocals/guitars/banjo, Greg Hough-lead vocals/guitars/mandolin, John DeGroff-bass, and Bill Glover on drums. Bob & Greg both shared singing duties on this 1974 debut recording.
In 1976 Bob Hartman contacted vocalist-Greg X Volz and invited him to perform as a guest singer on Petra's 1977 sophomore album ​'Come And Join Us'. On this release, Greg was given the opportunity to perform lead vocals on 3 different tracks. His work on the album didn't go unnoticed with guitarist/founder-Bob Hartman later offering Greg a full-time position as the band's lead vocalist. The line-up for 'Come And Join Us' was comprised of members Bob Hartman-guitars/vocals, Greg Hough-guitars/vocals, Greg X Volz-vocals, John DeGroff-bass, Steve McElyea-Keyboards and Bill Glover on drums.
After the release of their sophomore album, Greg X. Volz was officially given a position as lead vocalist for Petra. With Volz now fronting the band, in 1979 Petra recorded & released their 3rd full-length album titled 'Washes Whiter Than' on Star Song Records. This album finds Greg X. Volz sharing the mic with guest vocalist-Rob Frazier. 'Washes Whiter Than' had a radio friendly sound and helped Petra garner some much needed recognition in the music industry. This recording falls more in the Contemporary music category and is one of the softest albums that Petra has ever produced.
Over the next 7 years, Greg X. Volz continued in his position as lead vocalist for Petra and went on to perform as frontman on a number of albums including 1981 'Never Say Die', 1982 'More Power To Ya', 1983 'Not Of This World', 1984 'Beat The System', and the 1986 live album 'Captured In Time And Space'.
After the release of 'Captured In Time And Space,' Greg X. Volz moved on to pursue a solo career. The departure of Greg Volz left a gaping hole in the bands lead vocalist position. However, a vocalist named John Schlitt had sung on a recording for a bunch of kids in Illinois, and the tape recording had been circulated all over the music industry. One of the men who received a copy of John singing was a music critic for Christian music. Bob Hartman was a friend of the "music critic" and simply asked him if he could find a new singer for Petra. At that very moment, the critic produced the tape that he had been given of John Schlitt singing. After hearing John Schlitt sing, Bob was interested and they were able to contact John's brother from a phone number off the first album from John's previous band - 'Head East'. After obtaining John's number from his brother, "Bob Hartman calls John up and asks, "Would you consider singing for Petra?" John responds to Bob's question, "You gotta be kidding me! I haven't sung for five years." It had been five long years since he had sang with any band including his previous secular band 'Head East' because he had gotten saved and John was now content with his work as a 'Cost & Scheduling Engineer' for a mining construction company. However, John auditioned for the part and sang "Altar Ego,” a song that eventually appeared on Petra’s 1986's album Back to the Street. "There was one high part in it that I hit, and he (Bob) goes 'Where did that come from?!' I said, 'Oh, it's no big deal.’ I could see his eyes just clicking, going 'Yeah - got the range, got the….. this is good, this is good!' And it was funny! I felt like it had worked out well." 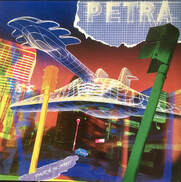 1986
John Schlitt officially joined Petra in 1986, bringing with him his incredible vocal range and abilities that made him a legend with Head East. The band didn't waste any time in getting to work on new material. That same year, in 1986 Petra released their 9th full-length studio album titled 'Back To The Street' on Star Song Records. The album was produced by John & Dino Elefante. The album garnered rave reviews which helped confirm the band's decision for their new lead vocalist-John Schlitt. The band's line-up for 'Back To The Street' was comprised of vocalist-John Schlitt, guitarist-Bob Hartman, bassist-Mark Kelly, keyboardist-John Elefante, and drummer-Louie Weaver. 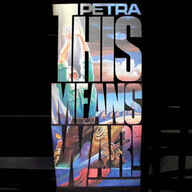 1987
In 1987 Petra released their 10th full-length studio album titled 'This Means War!' on Star Song Records. 'This Means War!' was one of the bands strongest albums opening with a war drum - military cadence letting the listener know right out that war had been declared! John Schlitt's vocals had a heavier - edgier sound than that of previous Petra vocalist which worked well with what was trending with secular bands of the time on the radio and Mtv. The album received rave reviews and has stood the test of time as a solid project that can be enjoyed today after some 30 + years. The line-up for 'This Means War' was comprised of vocalist-John Schlitt, guitarist-Bob Hartman, bassist-Mark Kelly, backing vocals-John Elefante, and drummer-Louie Weaver. 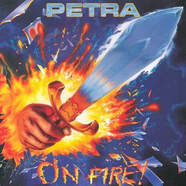 1988
In 1988 Petra showed no signs of stopping with the release of their 11th full-length studio album simply titled 'On Fire!' on Star Song Records. With 'On Fire!' the band took their music to the next level with 10 blazin' tracks filled with hard hittin' energy from beginning to end. The tempo was move up to notches not seen on previous releases to a level that sparked a full blaze upon each listen. This album demanded no less than to be played a full blast giving a proper dusting to the listener's speakers with each and every spin. This was Petra at their best with full command of the stage. There was no other band or album, at the time, that could compare with this fiery release. 'On Fire!' went on to receive rave reviews from around the world. The line-up for 'On Fire!' was comprised of vocalist-John Schlitt, guitarist-Bob Hartman, bassist-Ronny Cates, keyboardist-John Lowry, backing vocals-John Elefante, ​and drummer-Louie Weaver. 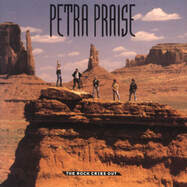 1989
In 1989 Petra released their 12th full-length studio album titled 'Petra Praise-The Rock Cries Out' on DaySpring Records. When this recording was published, this was exactly the kind of praise music that all us Rock and Metal heads were longing to hear. Praise music with an edge along with soaring vocals, electric guitars, and an attitude that takes the ordinary acoustic guitar and smashes it over aunt Sue's organ! The line-up for 'Petra Praise-The Rock Cries Out' was comprised of vocalist-John Schlitt, guitarist-Bob Hartman, bassist-Ronny Cates, keyboardist-John Lowry, saxophone-Greg Vail(track-12), drummer-Louie Weaver, backing vocals-Kathy Riso, Charlie Hoage, John Elefante, Rick Riso, and Sara Tennison. 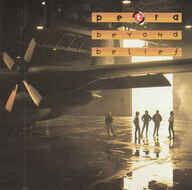 1990
In 1990 Petra released their 13th full-length studio album titled 'Beyond Belief' on DaySpring Records. This recording continues in the veins of the band's 1988 'On Fire!' release but with a slightly more modern fill to it. Petra's recipe for success on 'Beyond Belief' draws from a proven equation of elements consisting of all the right hooks, soaring vocals, energetic musical arrangements, tasty guitar licks, noticeable bass lines, poundin' drums, and uncompromising lyrics. The line-up for 'Beyond Belief' was comprised of vocalist-John Schlitt, guitarist-Bob Hartman, bassist-Ronny Cates, keyboardist-John Lowry, drummer-Louie Weaver, backing vocalists-Dave Amato, Dino Elefante, John Elefante, & John Schlitt. ​
After the release of their 1990 'Beyond Belief' recording, the band went on to release a number of albums including 1991-'Unseen Power', 1993-'Wake Up Call', 1995-'No Doubt', 1997-'Petra Praise 2-We Need Jesus', 1998-'God Fixation', 2000-'Double Take', 2001-'Revival', and 2003-'Jekyll and Hyde'. 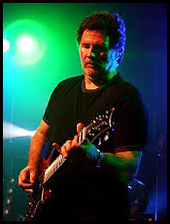 Founding member and timeless shredder-Bob Hartman
has been a solid anchor for Petra throughout the band's career.

(See Site Info for Sword Scale meaning)
Petra has stood the test of time with a career that has spanned over 30 years racking up a number of accolades including 21 studio albums, 2-Spanish releases, and 2-live albums. Petra has sold nearly 10 million albums, was nominated for 13 Grammy Awards-winning four, and went on to win 10 prestigious Dove Awards. Petra holds the title as the first Rock band inducted into the Gospel Music Hall of Fame. In addition, Petra was the first Christian band to have their memorabilia included in the Hard Rock Café restaurant chain.
It's worth noting that in May 2010, Greg Volz got his "second wind" with a familiar band when a re-united version of Petra was formed with its 1984-85 line-up going by the moniker 'Classic Petra'. The band was formed, or should we say was re-formed, of members that had once been part of Petra's line-up including vocalist-Greg X. Volz, guitarist-Bob Hartman, bassist-Mark Kelly, keyboardist-John Lawry, and drummer-Louie Weaver. In 2010 the band released their first album titled 'Back to the Rock' featuring re-recordings of original hits from the early 80's along with new material. Tracks 1-10 are re-recordings of earlier Petra songs from four different albums from 1981-1984, track 11 is a reworked re-recording of a Greg X. Volz solo song, and track 12 is a new song. This is a solid release and worth checking out if you are into Classic Rock n' Roll.
In 2012 'Classic Petra' released a second album titled​ 'Back To The Rock' "Live" on an indie label. The performances feature new live versions of some of the band's classic tracks, including "More Power To Ya", "Bema Seat", and many more. ​
If you are into bands like Journey, Foreigner, REO Speedwagon, Bloodgood, or Angelica then you are going to love what Petra has offered up over the years. Help support Christian Rock music by picking up a copy or two of the band's work today!
Purchases can be made at the following link:
Discogs
Musicians:
John Schlitt - Lead Vocals
Bob Hartman - Guitars
Ronny Cates - Bass
John Lowry - Keyboards
Louie Weaver - Drums