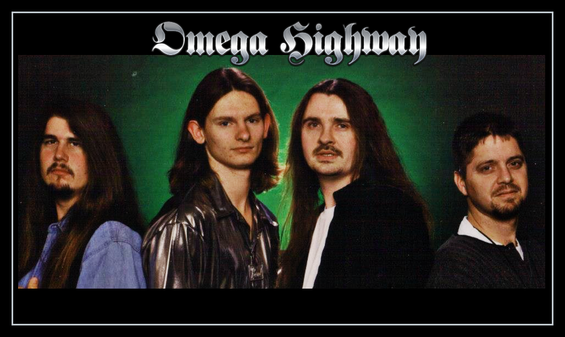 Omega Highway is a Hard Rock/Metal band that was formed back in 1992 by vocalist/guitarist-Mike Edward Smith. The band got their start by practicing in Mike's Mom's basement in a crowded 8 x 15 room. Later that same year, Omega Highway released their 1992 debut full-length album titled 'Willing to Fight'. Their debut was first released on cassette but, more recently, it was recorded on digital format in order to allow for digital downloads. In 1993 the band garnered some attention by the community when Omega Highway entered a 'Battle of the Bands' weekend-long contest at the Carl Casper Auto Show in Louisville, KY. The event was hosted by 'Far Out Music' of Cementville, Indiana and each band was given 20 minutes to perform. Omega Highway gave the performance of their life and at the end of the contest, the band took home 1st place. The group was given 3 different awards for winning including a $500 cash reward, a Tascam model four-track tape recorder valued at $950 dollars, and a $5oo gift certificate to 'Far Out Music' in Indiana.
Over the years, Omega Highway went on to produce a number of albums that are now considered rare gems in that they are hard to find today including 1999 'LOVE' released on Old School Records, (date not available)-'FATHER OF LIGHTS', (date not available)-'REST', and a raw Christmas album titled (date not available)-'THE INDESCRIBABLE GIFT'. Those who like their Christmas music Rocked up will love the different tracks the band has made available on this full-length album. The album features some remakes of some well known traditional Christmas favorites along with some not-so familiar Christmas tracks as well. 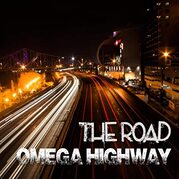 2013
In 2013 Omega Highway released their independent full-length studio album simply titled 'The Road'. The recording was ​produced by Mike Smith and is a partial compilation album. 'The Road' features 16-tracks with a number of tracks coming from the band's earlier albums along with some tracks that are all together new material. With this project, the band has created a solid Blues infused Hard Rock/Metal album in the veins of Journey. From track to track, one will find a significant amount of variation including bluesy Hard Rock, energetic driving tracks, progressive tracks, Metal oriented arrangements, Power ballads, acoustic guitars, and even light Doom arrangements. Yes, this album is very much in keeping with what one would almost always find within the majority of 80's oriented Hard Rock albums back in the day. With that said, it's always a good thing when the listener is presented with a smorgasbord of differing music styles from track to track.
Mike Smith is a powerful yet passionate vocalist with his delivery drawing comparison to singer-Mike Foster(Thunderchild). There are a number of songs on this 2013 release that have sent chills all over this listener -raising the hairs on these two arms due to a combination of factors including the lyrics, arrangements, and incredible vocal abilities of Michael Smith. Without a doubt, Mike is a very capable vocalist whose bluesy heart- felt-delivery adds a great deal to the bluesy Rock arrangements found on this album.

While spinning this disc, it's easy draw the conclusion that axeman-Mike Smith has been playing the guitar for many years with the level of prowess demonstrated here. Smith lights things up from beginning to end with many different Hard Rock guitar styles including 80's noodling, driving guitar play, some light Doom, and plenty of bluesy guitars not unlike that of world renown guitarist-Neal Schon(Journey). I must say that Mike Smith's guitar work on this project stands out just as much as his abilities behind the mic. This is some top of the line guitar work which helps to electrify the arrangements & elevate this project to a much higher level.
All lyrics are written by Mike Smith with many tracks actually being praise songs.
Lyrics are unabashedly Christ centered & evangelical as on can see in the following excerpts:
"Send Me"
​I heard the Lord​
Become and be My child today
​I heard the Lord
See because I'm the only way
​I heard the Lord
See I will give you peace of mind
​I heard the Lord
See I am with you all the time


"My God Lives"
I feel God all around, all around
I know He has brought me here
You will lead me on
And I feed upon His word
If feels my cup to overflowing
I know that He will light the way
To everlasting life

My God lives
And He will never die...

I was smoking my marijuana
Sifting through channels on my television
One sweet day, one sweet sweet day
there was a man talking about Jesus
And about the price He paid
To free us from our sins
And Hell's eternal flame


"Through The Blood"
Thank you for coming and paying the price
That freed me from the chains of sin on my life
Now I can see, when I used to be blind
Cause I'm washed in Your blood Jesus Christ
Everything You did was out of love
Every gift you gave came from above
And now I stand each day a soldier of the cross
I will walk that extra mile to win the lost

(See Site Info for Sword Scale meaning)
The following is a short review of the band that I found and couldn't help sharing:  "Amazing songs by an amazing band, I saw them play many times in the 90's. I still remember them playing the first time with Whitecross. My friend told me that everyone that listens to them is moved to tears by the anointing of the Holy Spirit. True to form, we brought a couple of girls with us that were backslidden and they cried most of the concert. My friend and I could hardly hold the tears in. This band was a Hard Rock Christian band with a ton of heart. - Steve Gates -
Omega Highway is for fans of Thunderchild, Journey, My Disgrace, and Red Sea. If you are looking for some classic style Hard Rock/Metal music that you will want to spin over and over again then check out what Omega Highway has delivered up with their 2013 'The Road' release. Pick up your copy today of this incredible release and help support the band!
Purchases can be made at any of the following links:
Amazon
iTunes
Musicians:
Mike Edward Smith - Lead Vocals & Guitars
Pete DiPietro - Bass
Jeffrey M. Farmer - Keyboards
​Jason Parrent - Drums