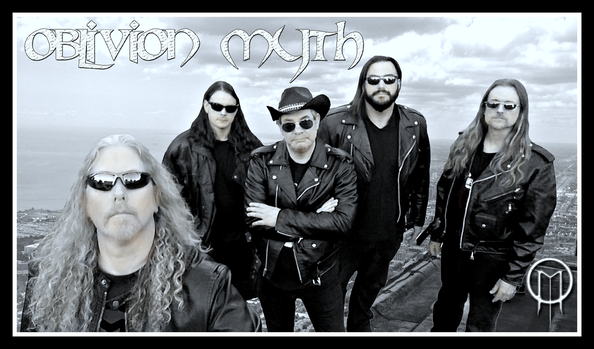 Oblivion Myth is a Heavy Metal band from Nashville, Tennessee  that formed back in 2005 by guitarist-Keith Smith. When it comes to genre placement, Oblivion Myth refuses to be pigeonholed into just one Metal genre. To create their unique sound the band incorporates an electrifying mixture of Heavy Metal, Hard Rock, and European inspired Power Metal into their arrangements.
Originally, Oblivion Myth was not a Christian oriented outfit until Keith Smith changed the band's direction back in 2012 along with former vocalist-Ray LeGrand. At that time, Keith & Ray decided that they both wanted to have a solid, positive, Christ centered message in their lyrics in order to reach people with a message of hope. However, shortly after this directional change, Ray left the band but not before handing off the baton to present-day vocalist-Tim McDonald. Tim has now taken the group's vision of hope and is helping the band to move forward in reaching out to the world with a bold message of faith and Truth.
​       In an interview at Angelic Warlord, Tim McDonald was asked about the meaning behind the band's name where he had the following to say:  "That’s really a statement about our Christian faith and belief in an afterlife, a Heaven, and that we go on after dying in this life.  We aren’t just worm food and it all fades to black.  Most people kind of understand this on an instinctive level.  We are born knowing only life.  Even when we sleep, we dream.  The concept of oblivion, that is, a total nothingness, a ceasing-to-exist state, is something the human mind can’t really grasp.  We know there are skeptics who say they require “proof”, but the truth is that a Christian sees proof of God all around us.  Jesus said there would be some who would hear his voice, and some who wouldn’t.  Faith is the acceptance of things unseen. Billy Graham once said, “can you see God?  I’ve never seen the wind.  I’ve seen the effects of the wind, but not the wind itself.  There’s a mystery to it.”  And we feel the same way. We see and feel the effects of God in our lives.  We see that it’s a better way than walking the path of the world."
Oblivion Myth now has a number of albums to their credit with their debut independent self-titled full-length album being released in 2006. In 2008 Oblivion Myth decided to reissue their self-titled debut 2006 release. This "second version" of their debut album features re-imagined artwork and was titled 'Between Light and Shadow'. After the release of their debut album, it would be another 8 years before fans would see another album from the band. During this time, the band was mostly focused on doing gigs and venues and honing their skills as a band. Then in 2016 Oblivion Myth surprised their fans with the release of their sophomore independent full-length album titled 'Inside The Mirror'. I.T.M. was a strong follow-up release for the band and went on to receive many rave reviews from within the Metal community. 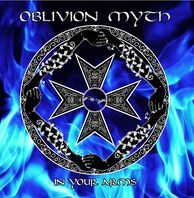 2020
In 2020 Oblivion Myth released their 3rd independent full-length studio album titled 'In Your Arms'. This project was produced by former frontman-Andy Freeman, who was the vocalist on Oblivion Myth's debut album. 'In Your Arms' was recorded by Curtis Erdek at Audiotopia Recording Studios in Lavergne, TN. The recording was mixed & mastered by Andy Freeman at 'Big Andy Studios' in Ocala, Florida.
​       Oblivion Myth spent more time in the studio on their latest release 'In Your Arms' than on previous albums, and the effort has paid off with an overall more polished sound and many layers of depth resulting in stronger and tighter arrangements. 'In Your Arms' is a solid mature offering from the band with high levels of energy with all the right hooks from beginning to end. ​There are no skipper on this release with each track being unique from another. One song that stands out here is track-2 "Thousand Years" which has that European Power Metal sound in the veins of the killer Italian Power Metal outfit - 'Choirs Of Veritas'.
Frontman-Tim McDonald draws strong comparison to Swedish vocalist-Peter Sigfridsson(Majestic Vanguard). The similarities between the two are so similar that upon first hearing Oblivion Myth's latest release, I was sure that Sigfridsson had joined the band. On this release, Tim McDonald delivers a strong performance and garners some additional help from guest vocalists Vicki Reid, Carmen Sanders, and Andy Freeman who all do a nice job of helping vary the vocals from track to track with some nice surprises.
The guitar section is comprised of lead guitarist-Keith Smith & rhythm guitarist-Chris Selby who both deliver from a duo shred approach. Both Keith and Chris ​light things up with some tasty guitar licks from beginning to end while never letting up. Not only are there plenty of Power Metal riffs to sink your teeth into, but there's even some light Doom play to be discovered on a few tracks along with some Thrash touches which all help bring this project to life.
Lyrics are thought provoking and Christ centered as one can see in the following excerpts:
"Thousand Years"
Matthew 10:16
Earthly ways are not our kingdom
We take orders from Another
Speaking truth and bringing freedom
Hear the call of our Father
On we go into battle
Fearless now, we counter devils
Lives are lived for Him that made
And He never will forsake


"The Veil"
Matthew 27:51
The lightning split the sky, the people cowered in fear
They knew what they had done to the Son
And earthquake, thunder, I feel the wrath of God
Power unimagined, people running in alarm
And the Veil was torn in two
The covenant from old to new

​
​"Slow Burn"
Mark 9:44
This game's for keeps and we're playing with fire
We've got to know that the end is forever
Yes, it's a slow burn, it lasts forever
Unless we cry out and call upon the Savior
The hottest fire, and we cannot quench it
The blackest night and we cannot light it
Inside a place where the burning has no ending


"Awake In The Night"
Ephesians 5:14
It's 2am, and I can't sleep
I pray the Lord my soul to keep
The house is cold and dark tonight
I'm stuck here on my own again
We awake in the night, upon us a Holy Light
A light for all of us to see


"Heirs To The Throne"
Romans 8:17
The heart can be so deceitful, above all things
it's desperately wicked, and the pain that it brings
The Holy Spirit is greater than the enemy of Earth
It lives in me and has known me since my birth
I have the mind to crush enemies of my soul
A new creation, divine right, behold!
The journey you might endure could lead you astray
He who has an ear, let him hear the Spirit say
Beware the prince of the power of the air, and its geist
We are the heirs, to the throne, of God, in Christ!

(See Site Info for Sword Scale meaning)
If you are into bands like Majestic Vanguard or Choirs Of Veritas then you are going to love what Oblivion Myth has offered up with their latest release 'In Your Arms'. Let's help support the band by picking up your copy of 'In Your Arms' today! Also, don't forget to check out the interview I had with the band.
Purchases can be made at any of the following links:
Roxx Records
iTunes
Oblivion Myth Site
Musicians:
Tim McDonald - Lead Vocals
Keith Smith - Lead Guitars
Chris Selby - Rhythm Guitars
Ryan Mark - Bass & Orchestration
Bob Schultz - Drums