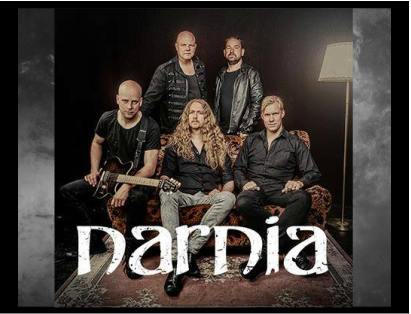 Frontman Christian Liljegren and guitarist CJ Grimmark first met in 1993, in the southern part of Sweden in a town called Jönköping. At this time, Christian was in a band called Modest Attraction and Grimmark was Lead Vocalist/Guitarist for a group called Sentinel. For the next 3 years, they both remained in contact. Then in 1996 Liljegren contacted Grimmark to see if he was interested in being a part of a new musical direction focused on Neoclassical Power Metal. This concept instantly captured the interest of Guitarist CJ which helped to push the idea forward. With a new band there's a need for a new band moniker which came after having seen the animated movie about the The Witch & The Lion, where Christian figured “Narnia” would be a great name for the new band. In just a few months Modest Attraction guitarist Stephan Mohlin left the band and Grimmark took his place giving him and Christian the opportunity to work on new material for Narnia. They both took songs from their bands Borderline, Modest Attraction & Sentinel and restructured them to work for the Neoclassical genre.
In September of 1996 Narnia entered the doors of Topz Recording Studio to record their debut album. They had finished all aspects of the recording process by the spring of 1997. Narnia quickly chose to go with Pony Canyon Inc, which is a solid label that has worked with such artists as Yngwie J. Malmsteen and  Joe Lynn Turner among others. In May 1997 Liljegren and Grimmark set out on their final tour with Modest Attraction. In Germany they met Matthias Mittelstädt who, along with his brother Rainer and Saviour Machine frontman Eric Clayton, was running a management company called MCM Music. MCM Music loved the album and took on the task of becoming Narnia´s management. The 'Awakening' album was released  on July 18, 1997, with several thousand copies sold on the day of the release. The band's line-up in 1997 included Christian Liljegren–Vocals, CJ Grimmark–Guitars, Andreas Johansson-Drums, Martin Härenstam–Keyboards, and Jakob Persson-Bass.
Throughout the years Narnia has had a few line-up changes. Bass player Jakob Persson left the band in 2001, and was replaced by Andreas Passmark(Royal Hunt, Rob Rock). Keyboard player Martin Härenstam said goodbye in 2003. During the years 2003-2009 Linus Kåse, Andreas Lindahl & Anders Berlin handled keyboard duties on the road. In 2008 frontman Christian Liljegren left the band for personal reasons. Narnia then recruited singer German Pasqual to finish the album “Course of a Generation” and the tour that followed.
In the first days of 2010 Grimmark made the decision to put Narnia to rest and the band went on hiatus. In 2013 Grimmark & Liljegren began discussing the reunion of Narnia and a new album that would be their strongest to date. In January of 2014, the band announced their return. In March of 2016, Narnia began working on recording their latest album for 2016 which would be self-titled which in essence helps to present to the Metal community a new beginning or a new birth of the band if you will.
Narnia now has 9 releases to their credit. They have 7 full-length studio albums including 1998-'Awakening' , 1999-'Long Live The King' , 2001-'Desert Land' , 2003-'The Great Fall' , 2006-'Enter The Gate' , 2009-'Course Of A Generation' , and 2016-'Narnia'. In 2006 they released a live album titled 'At Short Notice...Live In Germany' and in 2007 Narnia released their compilation titled 'Decade Of Confession'. 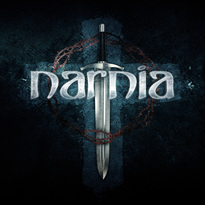 2016
In 2016, Narnia released their post hiatus self-titled album from afar, from the enchanted lands of Sweden. Without question, this is Narnia's strongest album to date featuring Melodic Neoclassical Power Metal seasoned with the right touches of Molten Metal. Most bands have one album that they are noted for, where everything comes together and all the puzzle pieces finally fit together nicely allowing a beautiful thing to emerge. For Narnia, I believe that that album is their latest 2016 release. Some times taking a break /hiatus can be a good thing as it can give one a new perspective and recharge the original vision of the band. ​
Narnia's 2016 self-titled album finds Vocalist Christian Liljegren in top form with one of his best performances to date. The vocals have a nice flow to them not coming across as being forced in any manner. Even though Christian shows great restraint and control, there are times when he pushes his vocals to the next level delivering more grit and punch to areas. In the mix, we find a much stronger connect between Liljegren and the supporting band behind him mostly due to Christian's placement being close to perfect unlike some of their previous releases where the vocals sound too far forward. Another highly noticeable feature is that there's no cheese to be found in the Vocals or anywhere else on this release . Like I said before, this is the strongest performance that I have ever heard from frontman Christian Liljegren.
Track by track review:
Track 1-"Reaching For The Top" Kicks thing off with some driving energetic Power Metal. Also, there's a sweet guitar solo by CJ Grimmark towards the middle of the tune. Track 2- "I Still Believe" Opens with a Epic European style Folk Metal guitar intro that helps put this track above others. Liljegren does a great job delivering the hooks while pushing his Vocals to the next level. Track 3- "On The Highest Mountain" Includes strong Vocals and lyrics that charge and compel us to stand up for our faith and be a beacon in the land of Narnia. Track 4- "Thank You" has that old Narnia fill to it and reminds, a bit, of the 80's band Petra. This track starts out slow and builds up to an epic guitar solo. Track 5- "One Way To The Promised Land" Cranks things back up with some straight forward Power Metal accompanied by stellar Vocals from Christian. There's some sick guitar solos here by Cj Grimmark that allow the tune to breathe. Track 6- "Messengers" is a powerful driving tune where Christian shows strong Vocal control and Grimmark lets loose with some nice solos. Track 7- "Who Do You Follow" opens with Epic Drums by Andreas "Habo" Johansson and some sweet Folk Metal guitar riffs by Cj which makes this listener happy. Also, there's some Thrashn' moments for all you Thrash fans out there. It''s hard to not notice the uplifting sound in this tune which we find in many of the tracks on this release. Track 8- "Moving On" helps propel the album forward at break neck speed with more epic drum lines and killer guitar solos. Track 9- "Set The World On Fire" includes more high-end Vocal work by Christian Liljegren accompanied by some sweet guitar licks by Grimmark.
While listening to this release, the listener is immediately swept away and taken on a journey to the Metal side of the land of Narnia, If one is attentive and listens carefully, then you just might hear the Lion Roar throughout the lyrics. These lyrics are full on for Jesus - the Lion of the tribe of Judah & Narnia as one can see here:
"On The Highest Mountain"
Follow me! Follow who? What is new?
Will I ever know?
I'm seeking confirmation, participation
A broader vision
Finding out the latest truth

Twenty years ago the call
To be a voice for the man who gave it all
Jesus Christ, The Son of God
The solid Rock the Lion's roar
We are here through it all

Get up, cry out on the highest mountain
We're not ashamed, not afraid to fall
Stand up and fight for the truth of ages
Let us declare freedom, One for all

Read your bible, say a prayer
For your brother, it's time to care
We all need salvation
On high horses, we're riding high
Riding blind, but still we try
​Time for redemption

(See Site Info for Sword Scale meaning)
If you love guitar solos and are into Metal with Neoclassical flavorings then you can't go wrong with Narnia's 2016 self-titled release. If you like bands like Energema, Gloriam Dei, or even Millennial Reign(2015) then you are going to love this album by Narnia so get your copy and let the adventure began.
​       Narnia will be releasing the album on September 16, 2016 on all major digital platforms, on CD and gatefolded vinyl.
Musicians:
Christian Liljegren-Vocals
CJ Grimmark-Guitars
Andreas Passmark-Bass
Martin Härenstam-Keyboards
Andreas "Habo" Johansson-Drums