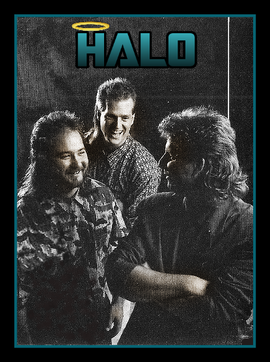 Halo is a melodic Rock band that formed in Alabama back in 1980 when drummer-Mike Graham was introduced to vocalist-Scott Springer & guitarist-Keith Mims. Graham, not being a christian, was quickly confronted by both Mims and Springer who both clearly stated their desire for the band to relay a christian message. Graham had already performed for a Southern Gospel group without conflict and was certain that they could all get along as well. Graham joined the group and after 2 years of performing with the band in 1982 he joined the christian faith by accepting Jesus as his Lord and Savior. The band then began touring the Southern United States performing mostly in Florida, Alabama, Tennessee, and Georgia. ​
​      After almost a decade of performing together frontman-Scott Springer announced that God was calling him to full-time ministry and he was getting ready to begin some seminary classes in order to become a youth pastor. It was at that time that the band met up with Bob Hartman(Petra) at a Petra concert and handed him a cassette recording of some of Halo's tracks. After having listened to the cassette, Bob contacted the group and invited them to his home studio to record a 4-track demo. Their demo was then presented to John Elefante of Pakaderm Records who quickly got the band into his studio to produce their first full-length offering.
When it comes to the meaning behind the band's name we find that 'Halo' is an acronym for 'Heavenly Angelic Light Orchestra'. 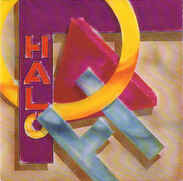 1990
In 1990 Halo released their debut full-length self-titled album on Pakaderm Records. The band's debut album was produced by the highly respected brother team - John & Dino Elefante who offered Halo a recording contract. The line-up was comprised of vocalist-Scott Springer, guitarist-Barry Graul, and drummer/keyboardist-Mike Graham. The band received some additional help from guitarist-Dino Elefante, guitarist-Keith Mims, guitarist-Glen Pearce, guitarist-Tony Palacios, and pianist-John Andrew Schreiner.
Halo's energetic AOR Rock sound has been compared to such well known bands as Journey, Foreigner, Kansas, and Mastedon. Personally I remember wearing out my cassette copy of this album because this release  was and is that good. 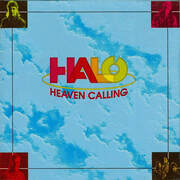 1991
In 1991 Halo released their highly anticipated follow-up full-length album titled 'Heaven Calling' on Pakaderm Records. The band's sophomore release was produced by brothers - John & Dino Elefante. The line-up for this release was comprised of vocalist-Scott Springer, guitarist-Barry Graul, and drummer/keyboardist -Mike Graham. The band received some additional help from guitarist-Glen Pearce, lap steel guitarist-Ron Eglett, mandolin-Larry Meyers, and backing vocals-Doug Beiden, Scott Springer. The only line-up change came by way of founding member-Keith Mims being replaced by guitarist-Barry Graul.
With the release of 'Heaven Calling', the band garnered some fame when their title cut was debuted on Billboard's Top Contemporary Christian chart at No. 21. In addition, Halo had a total of four Rock hits over the band's career. Halo also had some success internationally where they were greatly received in South America and Guatemala.
In 1993 Halo began recording a third album at Pakaderm studios but the album would never come to fruition. Halo disbanded in 1993 and Scott Springer went on to release a solo album that same year titled 'Hello Forever' which was recorded at Pakaderm Studios and produced by John & Dino Elefante.
In 2004, Scott Springer decided that it was time for a change and became head pastor of a new church with a casual atmosphere in Clanton, AL called New Life Community Church.
As the years went by Halo's debut and sophomore releases became hard to find as they went out of print. However, to the delight of their fans, in 2020 Halo's self-titled debut album along with their sophomore album 'Heaven Calling' were both reissued by Girder Records and remastered by Rob Colwell.
The band's lyrics are overtly Christ centered as one can see in the following excerpts:
"Thy Will Be Done"
Hallowed be thy name, o King of Kings
Father of our needs in everything
We thank You for what You have done
You're kingdom come, Thy will be done
Lord give us bread we need each day
And forgive our debts that we must pay
And deliver us from the evil one
You're kingdom come, Thy will be done


"Jacob's Dream"
I hear God say: I am the God of Abraham
I will hear when you call
I will give to you this land
I am the One who loves you so
I am with you all the way
I will go where you go
And now you must know,
your livin' in Jacob's dream


"It's Your Decision"
You're living the good life, you've made it on your own
You've got everything you've ever wanted, you planned it all alone
You've climbed every ladder and opened every door
But there's a feeling deep inside you that's wanting so much more

(See Site Info for Sword Scale meaning)
If you are looking for some solid AOR Rock music to add to your collection in the veins of Petra or Mastedon then you are going to love what Halo has offered up.
Purchases can be made at any of the following links:
Girder Records-Remaster
Discogs-Original
Amazon-Original