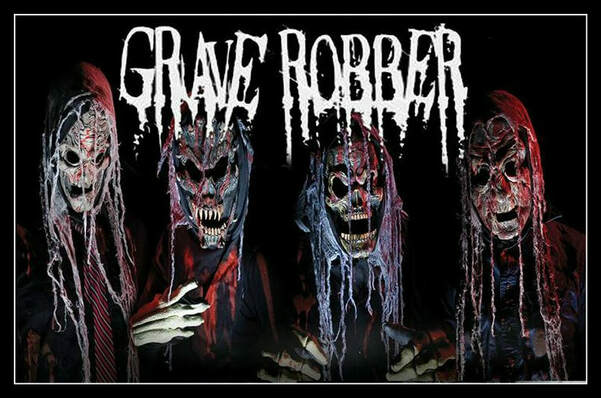 According to Wikipedia, Horror Punk is a music genre that mixes proto-Gothic and Punk Rock sounds with morbid and violent imagery and lyrics, which are often influenced by horror films or science fiction B-movies. Horror Punk leans towards a 1950's influenced doo-wop and rockabilly sound. 'The Misfits' and their first lead vocalist-Glenn Danzig are recognized as the progenitors of Horror Punk. Bands like The Undead(founded by ex-Misfits guitarist-Bobby Steele), Screaming Dead, The Damned, The Cramps, T.S.O.L, 45 Grave, and Rosemary's Babies can also be considered old school Horror Punk bands.
One of the latest bands to embrace the Horror Punk scene is Fort Wayne, Indiana's very own - Grave Robber. Grave Robber considers themselves a Horror Punk/Shock Rock band. The "Shock" connection comes from two different areas with the first probably being your reaction when you first laid eyes on the band's photo above. At an interview at Darkest Goth Magazine the band addresses their imagery:  "There’s definitely a symbolism to it. The costumes are covered in blood which symbolizes being covered by the atoning blood of Jesus on the cross. As far as what the costumes are, it just kind of happened organically. You know, we were just looking for something that would be inexpensive and yet visually dynamic." The second area where the band creates a "shock" factor is within their lyrics which often include dark metaphorical imagery in order to communicate their message.
In an interview with the band, at Darkest Goth Magazine, Grave Robber goes into detail about how they chose their band's moniker:   "Well, we were all big fans of the Misfits, big fans of that sound but yet we always hoped that there ​would be a Christian band that did that sound and that style of music. We didn’t really intend on being that band. Basically what happened is one night we were all sitting in church at an evening service and our pastor started talking about Romans 6 which speaks about being dead to the world and dead to sin, and we being the “mature” adults that we are started nudging each other and giggling about being zombies and saying, “Oh great we’re dead guys.” And afterwards we took communion which is a symbolic way of eating flesh and drinking the blood of Jesus. And one of my favorite songs from the band Petra is called, “Grave Robber,” and we thought it was a really good name for a band that ultimately talked about life but used a horror context and a gore context that was really aggressive, so we just went with that name."
To Grave Robber's credit, they now have 2-EPs, 4-studio albums, and 1-compilation along with a career that has spanned from 2005-present day. The band's two EP releases include: 'Love Hurts'- (2006) and 'Straight to Hell'- (2014, Rottweiler). The band's full-length studio albums include:  'Be Afraid'- (2008, Retroactive),  'Inner Sanctum'- (2009, Retroactive),  'You're All Gonna Die!'- (2011, Rottweiler),  and  'Escaping the Grave!'- (2018, Rottweiler). GR's compilation release is:  'Exhumed'- (2010, Rottweiler). 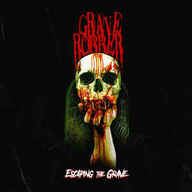 2018
In 2018 Grave Robber released their fourth full-length studio album titled 'Escaping The Grave' Rottweiler Records. The album's cover art is consistent with the band's genre listing of Horror Punk/Shock Rock listing as I could imagine this image being a captured moment or clip from a horror film. 'Escaping The Grave' is the band's fourth album to be released on the Rottweiler Records label.
Similar to the way the band members of Grave Robber have hidden their appearances with costumes, all members use aliases in place of their real names. The band's line-up is comprised of frontman-WRETCHED(founding member), guitarist-VIRAL, guitarist-GRIMM, bassist-CARCASS, and drummer-PLAGUE.
WRETCHED handles vocal duties for the band and moves back and forth between a heavy gruff delivery and a charismatic retro vocal style. 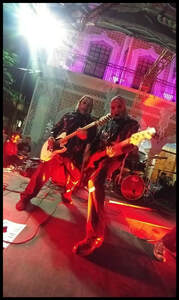 Guitarists-VIRAL & GRIMM both light things up on this release with a full barrage of punchy driving head bangin' guitar riffs. The riffs take on that fun classic rubber-band guitar sound associated with the Punk genre. There are times when Viral & Grimm's guitar play moves from jammin' to heavy and back again helping to mix thing up a bit.
Lyrics are thought provoking as one can see in the following excerpts:
"Escaping The Grave"
I was born deceased
A lawless, wretched ghoul
Wading in the mire of sin
A filthy black cess pool


"The Conjuring"
Like manicured grave plots
Worm eaten flesh, bone rot
Beneath your skin we find a total fraud

Snakes! You brood of vipers
The blood on your hands flows thick as tar
Raise up your proselytes
And make them twice the sons of hell you are


"Into The Pit"
Demonic deception embraced throughout the Earth
But a memorandum of rescue calls for your rebirth
Don’t you know the wages of sin are death?

(See Site Info for Sword Scale meaning)
If you are looking for something out of the ordinary and don't mind if a few zombies are your entertainment tonight then pick up a copy of Grave Robber's latest offering - "Escaping The Grave". So let's put on your best Zombie make up, borrow a shovel from the nearest graveyard to take the place of those air guitars, and let's crank those speakers to max!
Purchases of ​"Escaping The Grave" can be made at any of the following links:
Rottweiler Records
Amazon
iTunes
Musicians:
WRETCHED - Vokills, shovel
VIRAL - Guitars, Vokills
GRIMM - Guitars, Vokills
​CARCASS - Bass, Vokills
PLAGUE - Smash Doom Tub