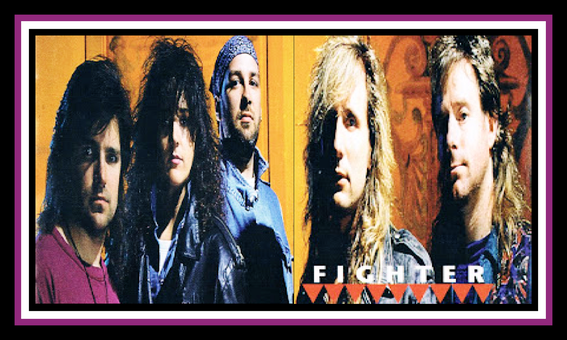 Fighter is an AOR Rock band from IOWA that formed back in 1986 by Sean Murphy, Jim, and Amy Wolter. Amy and Jim had both previously played together in a band called 'Sapphire' which produced one album titled 'Crystal Clear'. A few years later, Bill Heller and Mark Pence joined the band to complete their line-up.
Fighter is unique in that the band features not one but two lead vocalists. Over the years, there have been many bands that have tried to incorporate duo vocalists into their projects which often left the listener confused, scratching their heads, and wishing that the band would just select one of the two. However, this was not the case for Fighter. The band's tag-team vocalists are singers Amy Wolter and Sean Murphy. The duo vocals of both Amy and Sean worked well from track to track with both vocalist holding their own. Sean Murphy also manages drums & acoustic guitars for the band. Both Amy and Sean are backed by guitarist/bassist-Billy Heller, bassist-Jim Wolter, and keyboardist-Mark Pence.
In 1989 Fighter recorded their self-titled 4-track demo EP which the band only ​sold at venues & concerts. Fighter had the privilege of touring with such well known bands as Whitecross and Jet Circus. The band played along side of many bands including Mark Farner, Geoff Moore, Idle Cure, Petra, and Mylon Lefevre & Broken Heart just to mention a few. The track-list for their demo EP included 1.Radio Man 2.Leo 3.Face To Face 4.Irresponsible Evil.
Not long after their demo, the band entered the studio to begin work on additional material for a full-length recording. ​ 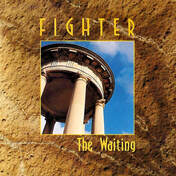 1991
In 1991 Fighter released their full-length debut studio album titled 'The Waiting' on Wonderland/Word Records. The album was a solid offering that was well received by fans and radio stations abroad. ​Fighter's debut has a radio friendly(AOR) feel to it with enough catchy choruses, hooks, and lures, to capture the attention of the 80's/90's Rock fan. 'The Waiting' had 3-songs that charted as radio hits including "Star One"#7, "Do What You Want"#18 and "Radio Man"#26 which helped Fighter gain traction as a new band on the Rock scene. The recording was produced by Caesar and engineered by both John Thomson & Tom Tatman. The line-up for 'The Waiting' was comprised of lead vocalist-Amy Wolter, lead vocalist/drummer-Sean Murphy, guitarist-Billy Heller, bassist-Jim Wolter, keyboardist-Mark Pence, and guest vocalist-Dawn Heller on "Shadows". The track-list for 'The Waiting' includes 1.Look Me In The Eye 2.Wishful Thinking 3.Shadows 4.Face To Face 5.Star One 6.Do What You Want 7.Running The Race 8.Nice Guy 9.The Waiting 10.Radio Man 11.Stop Look Listen.
It's worth noting that in 2019 Girder Records re-issued 'The Waiting' and have included Fighter's original EP as well. This re-issue has been completely remastered and features the band's story, various photos, and modified artwork. As mentioned above, it also includes their original 4-track Demo EP including songs "Leo", "Irresponsible Evil", along with "Radio Man" and "Face to Face", which were both re-recorded and then added to the band's debut 'The Waiting'. 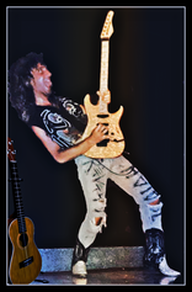 Bill Heller offers up some tasty licks energizing the arrangements from the opening track to the last. Bill's guitar style mostly draws from the Arena Rock era which makes this listener more than happy.​
Lyrics for 'The Waiting' are thought provoking and
​Christ centered as one can see in the following excerpts:
"The Waiting"
I can rest in knowing
There's a plan for all my days
I need to say within God's timing
Try to understand His ways
Not always understanding
I don't always know what for
But it's hope that keeps me goin' now
I'll be waiting near the door


"Shadows"
Should we do as we please
And risk their disease
Is heaven just to hard to sell?
I'm sharing tonight
My God given right
To save others from burning in hell

You felt my pain, Your life was lost
You called it gain, they called it loss
I see it now, You are the way
To live in Christ, to die is gain


"Face To Face"
And how long will it be 'til we've planted a seed
In a heart that will not mend?
Is it really to much, all they need is a touch from a friend
And how short is your love, and do you have enough
To make a dying world believe?

(See Site Info for Sword Scale meaning. This rating is only for 'The Waiting')
After the release of their 1991 debut album, Fighter showed no signs of stopping when they stepped back into the studio and began working on new material for a new recording. 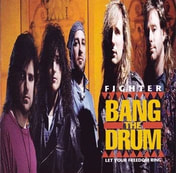 1992
In 1992 Fighter released their full-length sophomore album titled 'Bang The Drum' on Wonderland Records.
This follow-up recording was produced by both Fighter & Caesar and was executive produced by Caesar &  Gavin Morkel. The album was engineered by Caesar and the drums were programmed by Mark Pence. ​The line-up for 'The Waiting' was comprised of lead vocalist-Amy Wolter, lead vocalist-Sean Murphy, guitarist-Billy Heller, bassist-Jim Wolter, and guest musician: keyboardist-Mark Pence. The track-list for 'Bang The Drum' incudes 1.Time Out 2.Alone With You 3.Bang The Drum 4.When Will We Learn 5.Faithfully 6.Avalanche 7.Try 8.So Much To Learn 9.Without You 10.Your Hand 11.Where Can Love Be Found.
'Bang The Drum' was a solid follow-up to the group's debut release however, at the time of publication, the music industry was changing drastically. The Grunge and Alternative scene was in full swing casting Melodic Rock to the side. There was no longer a market for Arena Rock style music so the band members all packed up their equipment and went their separate ways. 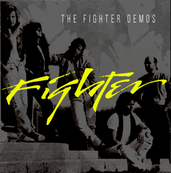 2019
In 2019 Girder Records unearthed some of the bands early demos and produced a compilation album appropriately titled 'The Fighter Demos'. "This album features the band’s original demos, three of which were never released until now including "Through Your Eyes", "Fighting Fire With Fire", and "Jamie". The track-list for 'The Fighter Demos' includes 1.Stop Look Listen 2.Through Your Eyes 3.The Waiting 4.Mr. Nice Guy 5.Running The Race 6.Fighting Fire With Fire 7.Do What You Want 8.Star One 9.Jamie.
In 1994 vocalist-Amy Wolter went on to produce a solo project titled 'Hit Me In The Heart'. This solo release includes 11-track and was produced and mixed by Caesar(Fighter's Producer). Fans of Amy Wolter will find that her solo album continues in the veins of her previous work with Fighter.
Fighter is for fans of Pat Benatar, John Waite, Greg X Volz, and Whiteheart. If you are looking for some classic AOR Melodic Rock music to add to your collection then you are going to love what Fighter has offered up with their two different albums 'The Waiting' & 'Bang The Drum'. Pick up your copy of one if not both of these releases today!
Purchases can be made at any of the following links:
Discogs
Girder
Amazon
Musicians:
Amy Wolter - Lead Vocals
Sean Murphy - Lead Vocals, Drums, & Acoustic Guitars
Billy Heller - Guitars
Jim Wolter - Bass & Backing Vocals
Mark Pence - Keyboards & Programming