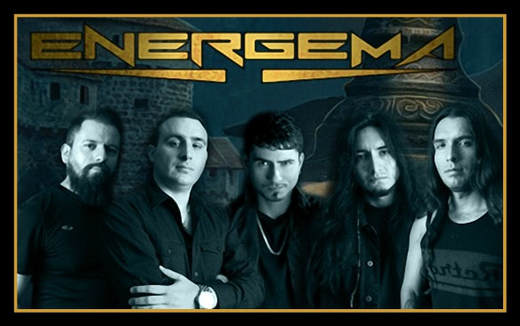 Energema is a 5-piece Power Metal band from Bogotá, Colombia which was formed by Guitarist-Nicolas Waldo back in 2015. The meaning behind the band's name-Energema is - "The Divine power for to Creation". The original band was comprised of Vocalist-Alejandro Pinzon, Lead Guitarist-Nicolas Waldo,  Rhythm Guitarist-Andres Parada, Bassist-Daniel Pinzon, and Drummer-Mauricio Landinez. Energema delivers up high octane Power Metal combining both European & Western flavors in their arrangements.
Energema stormed onto the Power Metal scene in 2016 with their full-length debut release 'The Lion's Forces' which was well received here at Christian Molten Metal even finding a spot in our Metal of the Month Archive. It's also worth noting that 'The Lion's Forces' received 80% out of a possible total of 100% at Angelic Warlord's Metal site. 'The Lion's Forces' was a studio production which was released on the Sleaszy Rider record label out of Greece. 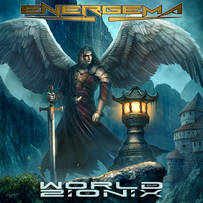 2017
Just one year after their 2016 debut, Energema released their follow up 2017 sophomore full-length album titled 'World Of Zionix'. Their sophomore offering was also released on the Sleasezy Rider record label just as the band's debut. All original members have returned accept one-Mauricio Landinez who was replaced by Drummer-Leandro Arias who now joins the original members - Vocalist-Alejandro Pinzon, Lead Guitarist-Nicolas Waldo, Rhythm Guitarist-Andres Parada, and Bassist-Daniel Pinzon.
'World Of Zionix' Is a concept album filled with allegorical symbolism from beginning to end. Many bands have successfully released concept albums especially in the Power Metal community i.e. Seventh Avenue(Terium). However, I personally found the story line in 'World of Zionix' some what hard to follow. I also feel that the symbolic analogies needed to be stronger in order for the listener to better understand there connection to the bible. However, many listeners who enjoy Power Metal, will find plenty to get excited about here with their sophomore release. Vocalist-Alejandro Pinzon does a stand up job behind the mic while Nicolas Waldo shows his prowess delivering a first class performance showing the listener what a 6 string instrument is capable of. Nicolas' guitar work is one of the highlights on this album and a good example is found in track 8 - "Blue Fire Torch". This is an instrumental where Nicolas cuts loose giving the listener some shredded Metal to sink their teeth into. 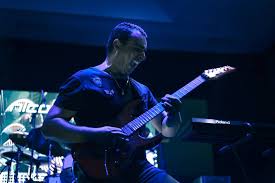 The lyrics on Energema's 'The Lion's Forces', used analogies from C.S. Lewis' writings to convey a message of truth. In the following, Nicolas Waldo goes into further detail: "You know the "Analogy" in Literature??... C.S.Lewis was a christian writer and his more famous book "The Chronicles of Narnia" was written under this term. He did not call the name "JESUS" directly...He used the name "ASLAN" in his story; He did not use LUCIFER, SATAN , etc... He used the name "THE WHITE WITCH"....etc...but the christian message it is clear.
On 'World Of Zionix' the story is a similar idea...and yes!... it is a Christian album ; the original story is based 100% on the Bible but I used different names to describe the characters. Why I did it?...´cause it is important to carry the message to other people that maybe will not listen to our music if I use the real names...for example...
God is the almighty creator of all universe and in the story of World Of Zionix His name is DEUEL. The representation of JesusChrist in the bible is the Lion, for Energema, the "Lion" is our logo, "The Lion Of Judah"...it´s ok... but also in the bible God is also represented like an Eagle. I wanted to use this description and in the story "Deuel" is "The Golden Eagle" that reigns over all the universe - I do not used the "Lion" ´cause in "Narnia" c.s. lewis used the Lion (Aslan)."
​Deuteronomy 32:11 Modern English Version (MEV)
Like an eagle stirs up her nest,
that flutters over her young,
He spread out his wings and took him;
He lifted him on His pinions; the Lord alone guided him,
and there was no foreign god with him.
"The story of 'World Of Zionix' has an evil prince that was revealed against Deul and Zionix ...his name is PERSIDA- In the bible, Lucifer was revealed against God because he wanted to be like God."
All lyrics are written by Nicolas Waldo and are allegorical in nature.
​ The following information will help you to understand and follow the story line of this release:
​
Story Characters & Miscellaneous info:
Deuel - God/Eagle
The Witness - Jesus
​Persida - Evil Prince/Satan/Lucifer
Aren and Rick - Care takers of the Energema
Energema - The Power of God/Deuel/Jesus
The Sun Of Justice - The Sun Planet/Zion/Heaven
Murdok - Dark Planet in the galaxy of Vamir where Persida was expelled to/Hell
​Tersis - Earth

​
The following are some lyric excerpts from 'World Of Zionix':
"Aren"
Fly high!...Princess Aren!
Today your dreams will be fulfilled
You are not alone
I am with you in your mind, heart, and your soul

"Energema:Fire of The Creation"
Hold up your sword!...You decided!
The destiny will be sealed with blood
Put on your armour
The time has come!
We protect the Power of Creation​

(See Site Info for Sword Scale meaning)
Energema delivers up fist pumpn' Power Metal in the veins of Adiastasia, Gloriam Dei, Millennial Reign, and Narnia. If you are looking to add some more quality Metal to your collection then consider what Energema has brought to the table with their latest release 'World Of Zionix'.
Purchases can be made at any of the following sites:
Bandcamp
Amazon
iTunes
Musicians:
Alejandro Pinzon - Vocals
Nicolas Waldo - Lead Guitar/Keyboard/Composition
Andres Parada - Rhythm Guitar
Daniel Pinzon - Bass
Leandro Arias - Drums