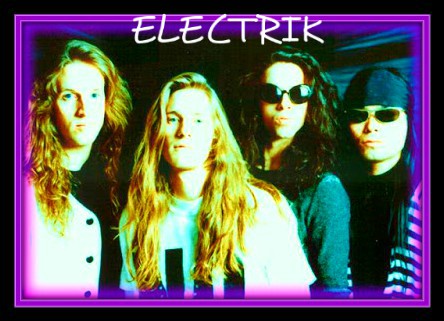 Electrik formed back in the late 80's in Los Angeles, California where they were known as a Glam Rock/Pop Rock band. Electrik's sound is energetic and can best be described as sounding somewhere between Poison, Cheap Trick, and Soul Asylum with some Beatlesesque harmonies thrown in for fun. With these kinds of distinct band intricacies permeating throughout their arrangements, it makes for a fun and enjoyable listening experience as the disc moves from track to track. 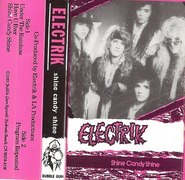 In 1989 Electrik stepped onto the rock scene with the release of their 3-track cassette EP titled 'Shine Candy Shine' which was well received within the underground community. This release was produced on the band's own label-'Bubble Gum Kid Records'. The track list for their EP included 1.Under The Rainbow  2.Have U Ever and  3.Shine Candy Shine.
​       Just a couple of years after the release of their 3-track EP, Electrik garnered some fame within the underground Rock/Metal scene for their stunning performance at Cornerstone Festival '91. 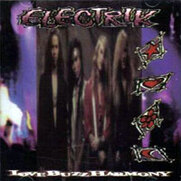 In 1993 Electrik released their independent debut 7-track EP titled 'Love Buzz Harmony'. With this release, the band was poised to take on the world. The album helped Electrik garner a much larger following in the underground realm. The track list for 'Love Buzz Harmony' includes 1.Krush My Groove 2.Good Thing 3.She Loves 4.Never Too Much 5.Show Me Your Soul 6.Blindmans Holiday 7.Nu Style. This release was produced by Electrik in conjunction with the Pfeiffer brothers & John Steinhoff. The album was recorded at Westlake Audio in Hollywood Hills, CA and mixed by Dino Maddalone. 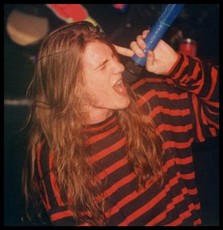 As one might expect from the Glam scene, vocalist-Benjamin Leigh delivers up all the right hooks to keep one returning for more. Leigh's delivery often comes across as sounding similar to that of vocalist-Bret Michaels(Poison). Leigh further shows his diversity in that there are moments when his delivery sounds similar to vocalists-David Pirner(Soul Asylum). In addition, ​throughout this project Benjamin Leigh continues to surprise us as he shows his genius in some fun quarky moments when his vocals take on a Beatles-sounding-delivery adding a fun flair to each listen. 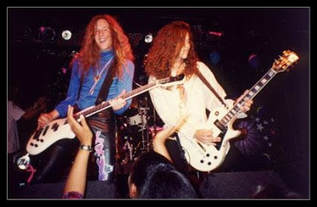 The shred is handled by guitarist-Chassy Stevens who plays in the many styles of the 80's with plenty of driving riffs. Stevens shows his prowess as he moves from driving riffs to sections when the guitars sound groovy as they take on a slick-funky sound. You will also find Chassy wielding an acoustic guitar on various tracks like the ballad "Never Too Much" or in the opening of "Have U Ever".
In the years following the release of their 7-track EP 'Love Buzz Harmony', the band went there separate ways and haven't been heard from since. 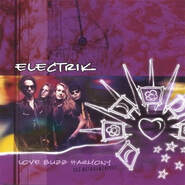 2004
In 2004 'Love Buzz Harmony' was re-issued by Retroactive Records in a full-length compilation which features the original 7-tracks found on their SOLD-OUT limited edition 1993 EP "Love Buzz Harmony," plus the near-impossible to find 1989 3-track cassette EP "Shine Candy Shine". In addition, this compilation also includes 2 newly recorded songs - "Count It Joy" and "Daisy" which are both included as Ultra-Bonus tracks bringing the total to 12-tracks in all. ​
When it comes to the band's lyrics, there are references to Jesus, God, salvation, and love
but this is by no means a bible thumping preachy project. It's meant to be fun with some christian messages
​ thrown in here and there as seen in the following lyrics:

...When you realize you need someone
Iv'e been here all along!

If i show you my soul will you take it
My rules will you throw them all away...


"Have U Ever"
​Dear God
I got a friend of mine
Who doesn't have very much time
Would You be so kind as to save his soul
Please God save my soul...

(See Site Info for Sword Scale meaning)
(metalmaniac777) had the following to say about the band:
"If you're craving a Christian band (without the overt Christian lyrics) that sounds similar to early Poison, then this CD will send excitement shivering through you like a high voltage electrical current. Fall in love with the glammy guitars, sway your body to the delicious hooks, and listen in wonder to the generous layers of harmony vocals. The requisite ballad, "Never too Much," is an absolute highlight, easily ranking among my favorite Christian rock/metal ballads, and superb enough to give you a melodic buzz for the rest of the day. Do you need this CD in order to maintain harmony in your life? Probably not, but why risk it?"
If you are looking for some indie underground retro Glam Rock to add to your collection and are into bands like Def Leppard, Desyre, Crossrock, or Poison then you are going to love this band from California. This is one of those albums that is just fun to listen to in which you will find yourself coming back to time and time again!
​One can make album purchases at the following links:
Ebay
Amazon
iTunes
Musicians:
​Benjamin Leigh-Vocals
Chassy Stevens-Guitars
Eddie Krystal-Bass
Michael Kei-Drums