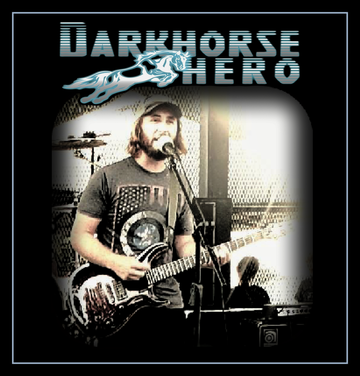 Darkhorse Hero is a solo project that saw its conception back in 2019 by vocalist/guitarist-Andrew Gazaway(Joshua’s Creed). Darkhorse Hero hails from St. Joseph, Missouri and draws comparison to such bands as W.A.S.P. and Warrant. When it comes to the band's name and the meaning behind it, Andrew explains: "Its kind of hard to come up with a unique name anymore as there are so many great names taken. So, I liked the phrase 'dark horse' meaning an 'unexpected champion'. You know, when I read about the life of Jesus I envision him as an underdog who everyone thought was beaten but he came back to life and won against hell, and one day he will return to reign over all. He's the unexpected champion."
​       Andrew Gazaway grew up as the son-of-a-preacher and early on he was drawn towards the melodic nature of the 80's Rock scene where he began to listen to bands like Petra & Stryper. Gazaway had discovered early on that he had an unquenchable love for both singing and playing the guitar. Over the years, he began developing his vocals along with his skills on the electric guitar. It wasn't long before he felt God's calling on his life and began focusing on how to apply his gifts as a Christian artist in the Rock music scene. In 2019 Gazaway joined a group called Joshua’s Creed where he took front and center as lead vocalist for the band. Joshua's Creed was formed by Derek Close and the group is currently working on their second album in where they plan to have Gazaway perform vocal duties on the project.
​       Not long after joining Joshua's Creed, Gazaway decided it was time to form his own band and started taking the necessary steps to realize his dream. That same year, he began recording material for a full-length album. In 2019 Gazaway completed his solo project and 'Darkhorse Hero' stepped onto the Hard Rock music scene with the release of their debut self-titled album. The album received strong reviews within the Hard Rock community helping to establish the band as a force to be reckoned with.
Some bands that have influenced Andrew Gazaway over the years include Keith Green, Petra, DC Talk, Audio Adrenaline, Newsboys, Christian Liljegren(Narnia, Golden Resurrection), Henrik Båth(Darkwater, Harmony), CJ Grimmark(Narnia), Markus Sigfridsson(Harmony, 7days), Val Woods(Theocracy), Malmsteen, and Tommy Johansson(Reinxeed/Majestica, Sabaton) just to mention a few.
​       After the release of his debut album, Andrew Gazaway showed no signs of slowing down when the band returned to the studio in 2020 to begin recording new material for a second album. 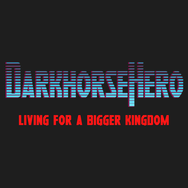 2021
In 2021 Darkhorse Hero followed up with their independent full-length sophomore album titled 'Mixtape Vol2 Living for a Bigger Kingdom'. ​The album was recorded from the winter of 2020 until the spring of 2021 at  Gazaway's home studio in St. Joseph, ​Missouri. Anthony Maillard Programmed all drums on the recording and mixed & mastered the album at Octopus Studio in Columbia. The only exception was "Living for a Bigger Kingdom" which was mixed by audio engineer-Viktor Stenquist(Narnia, The Waymaker, & Melodic Passion). All songs and lyrics were written and recorded by Andrew Gazaway.
'MVLFABK' is a strong follow-up to the band's 2019 self-titled album and finds the band branching out and incorporating plenty of variance in the arrangements throughout the recording. As a vocalist, Gazaway does a good job of varying his delivery by moving back and forth between heavy and lighter vocal styles. The musical arrangements move from varying 80's Rock styles to Folk touches to Power Metal all lightly seasoned with modern day elements. The energy on this release is off the scales and is guaranteed to send chills through the most hardened of Hard Rock fans. from the first chord to the last, the album doesn't let up keeping the listener engaged in every detail of the music.
This release features a few guest surprises with ​the first track "Morning Star" featuring the highly acclaimed Piccolo musician-Miguel Vargas from Venezuela. The second surprise comes by way of Gazaway bringing on world renown singer-Christian Liljegren(Narnia) as duo vocalist on the album's title track "Living for a Bigger Kingdom". Gazaway states: ​"I have been after a song with Christian for some time now as he is a rock and roll hero of mine with the most ferocious voice in Metal today. Even more so, his dedication to Jesus, album after album through all his years, is truly inspiring." Christian Liljegren's vocals on "Living for a Bigger Kingdom" were recorded in Sweden at Liljegren's studio(Melodic Passion Records).
Frontman-Andrew Gazaway is a powerful lead vocalist for the band. With Darkhorse Hero's debut release, we saw a good performance from Gazaway yet there were some areas within his delivery that needed to be tightened up. With that said, this follow-up album finds Gazaway taking the bull by the horns and delivering up a solid performance that will not soon be forgotten. From beginning to end, Gazaway takes things to the next level offering all the right hooks, soaring vocals, and lots of diversity within his delivery. Gazaway's unique powerful vocal style can be described as some what of a mix between Blackie Lawless(W.A.S.P.) and Jimmy Jamison(Survivor).

Andrew Gazaway heads up the guitar section delivering up an impressive performance that will have guitar aficionados drooling for more. On track-7 "Legend of the Golden Charvel," Gazaway is unchained allowing him the opportunity to showcase his prowess with the 6-strings where one will discover nothing short of a good old fashion barn burning! The title "Legend of the Golden Charvel" was chosen due to the fact that a Charvel is a brand of electric guitars and the brainchild of Wayne Charvel who founded his product back in the 1970's in Azusa, California. According to Wikipedia, Charvel guitars went on to become popular in the 1980's due to their association with famous Rock and Heavy Metal guitarists such as Eddie Van Halen, Richie Sambora(Bon Jovi), Warren DeMartini(Ratt), Randy Rhoads(Quiet Riot), and George Lynch(Dokken) just to mention a few.
​       Gazaway goes into some detail concerning the lyrical content within his latest release:  "It is a collection of songs inspired by some of my favorite Bible stories. I am a huge fan of the band Sabaton who makes history come alive by telling war stories by song. My hope is to make the Bible come alive in the same way so we remember the history of our faith and are encouraged by our God who gives us victory. 'Living for a Bigger Kingdom' was inspired by fellow Christians who have faced persecution and yet stood strong in the faith. These are the most courageous people on the planet in my opinion. You will find the theme throughout this album is that those who put their faith in Jesus are indeed living for a bigger Kingdom."
"The songs are a reflection of my faith in Jesus and my ​hope is
to encourage fellow believers to keep their faith in him." - Andrew Gazaway -
"Morning Star"
Weep no more child of God
The morning star has come
Conqueror, Lord of all
Goodness has won


"The Wrath of Shammah"
(2 Samuel 23:11-12)
One by one the enemy fell
As his sword swung mighty and true
With the strength of a hundred men
He would not give up his land

Stood his ground in the lentil field
And said, if you want it come and get it
You’ll have to go through me
Raised his sword to the sky
Let out his battle cry
God is for me, who could stand against me


"Living For a Bigger Kingdom"
(Daniel 3:1-30)
The king sent his royal decree
Said all must come bow down to me
But there were three men who said this won't work
We only bow down to one Lord


"Darkhorse 2.0"
(Isaiah 66:15-24 / 1 Thessalonians 5:1-11)
Heard a legend a long time ago
About the man on a white horse
Coming in the dead of night
Like a thundering atomic force
With fire in his eyes and justice on his wings
Returning to take back his thrown
The King above all kings


"Fire of God"
(1 Kings 18:1-46)
Elijah rose and lifted his voice
Glory on high
Glory in the highest
The Lion of Judah reveal Yourself
Show us Your power!

(See Site Info for Sword Scale meaning)
​       If you are looking for new music with an 80's era attitude then check out what this band has offered up. Darkhorse Hero's sophomore album 'Mixtape Vol2 Living for a Bigger Kingdom' is what Hard Rock at its best longs to look like! Help support Christian Hard Rock music by picking up your copy of Andrew Gazaway's latest project today! Also don't forget to check out the interview I had with the band.
('Mixtape Vol2 Living for a Bigger Kingdom' will be released sometime at the end of October)
Purchases can be made at any of the following links:
iTunes
Amazon
Musicians:
​Andrew Gazaway(Joshua’s Creed) - Lead Vocals, Guitars, & Bass