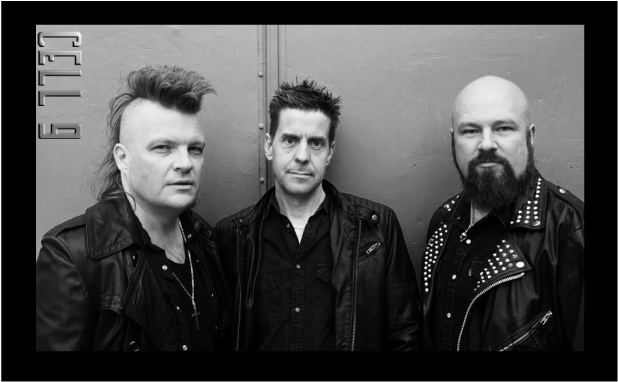 In east central Sweden, north of Stockholm, you will find an area called Sollentuna. It was here in 2015 where Frontman Torbjörn Weinesjö(Veni Domine, Audiovision) was writing new material when his long time friend and old band mate from the 80's Niklas Wilhelmsson(Disciples and Bishop Caps) stopped by to repair one of his Basses. Niklas was asked to to bring a working Bass in order to lay down some Bass lines on some tunes that were already in the works. This reunion of two long time friends would prove to be the genesis of a new & upcoming band. Later, Torbjörn's brother- Thomas Weinesjö(Veni Domine, Saviour Machine, Audiovision), was added to complete this Swedish band. The recording sessions took place at their rehearsal place in room number 9 aka “Cell 9”, where Veni Domine recorded their last efforts as well. So it was a natural move for the trio to adopt Cell 9 as their band moniker. Once the band had formed, these 3 new "cell mates" wasted no time and began immediately working on material for their debut release.
Even though the band is new on the Rock scene, they have already made a mark for themselves by having already toured with the well known Swedish Power Metal act Narnia. 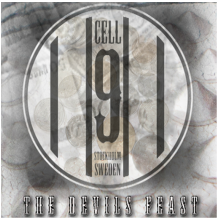 2016
Hailing from Stockholm, Sweden, Cell 9 stepped onto the music scene in 2016 with the release of their debut full-length album 'The Devils Feast'. All tunes for 'The Devils Feast' were written by Cell 9 and produced & mixed by Torbjörn Weinesjö and Cell 9 at the Room of Doom. With all members having already been in various well known bands, it's easy to see that one is going to be in for a ride with this top-notch release. Cell 9 is a Hard Rock/Doom band with enough depth to occasionally step away from their signature Doom sound in order to offer up some fast Power Metal riffs. Yes, this is one album that will leave you hungry for more.
Torbjörn Weinesjö stands front and center for the band mixing clean medium range vocals with attitude not unlike 80's/90's Vocalist Michael Knott(L.S.U./Life Savers Underground). Torbjörn's Vocals often draws from Goth style deliveries throwing a curve to those who want to put a label on his Vocal style. There's also something to be said for the electric vibe of excitement that he brings to the table keeping repeat listens interesting. 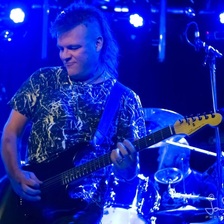 Frontman Torbjörn Weinesjö also manages the guitars which hit hard and heavy with some bone crushing riffs all the while having an in-concert sound to them. Often we hear in the arrangements duo guitars even though there's only one guitarist sporting an axe. This is accomplished through a little process called overdubbing where the band layers the guitars in the mix. Torbjörn knows his way around a fret board drawing from many different styles and genres delivering up heavy crunchy Hard Rock style riffs to atmospheric Doom to Power Metal shredn to Grunge and even to Punk-rubber band sounding guitar play. If your not into Doom due to the slow drawn out guitar riffs, you shouldn't let that stop you from enjoying this project. There are 3 or more Power Metal tracks here along with faster guitar play throughout many of the other tunes as well which all add gas to this release.
Niklas Wilhelmsson handles Bass for the band and quickly shows that he's no rookie here. One thing that makes this release stand out amongst others is the way Niklas's Bass work frequently surfaces and is often given moments to shine. Also, the Bass play couples nicely with the guitars in creating the band's signature Doom sound.
Thomas Weinesjö keeps time for the band and does a good job of mixing things up with many time changes.
When it comes to lyrics, Cell 9's takes a more subtle approach while still conveying a message of truth. The lyrics often seem to move from one idea to another similar to how the book of Proverbs reads. The following lyric gives some insight into some of the band's lyrical direction:
"Intertwined"
Meadows of serenity I am surrounded
All through the darkest days I am guided
You know when I am numb I see you
You know when I am blind I sense you
You and I are intertwined
My story fails without you
In symbiosis forever more
My mind is clear my heart adores
Within my smallest thought I hear you
When I get out of hand You love me
When I am out of reach
You´re connected
Trapped in my loneliness
Your light will search my soul
Pain will always strive
Way deeper Grief will surrender to love
And multiply

(See Site Info for Sword Scale meaning)
If you are into Hard Rock, Doom, Power Metal, or even Goth then you should do yourself a favor and give Cell 9 a listen. Don't fret over bringing these cell mates into your home they promise that they were all released on good conduct. Set your speakers to max, grab you electric air guitars, and lets rock the neighbors with some Cell House Rock.
At this time, you can find Cell 9 - 'The Devils Feast' exclusively on iTunes.
Cell Mates:
Torbjörn Weinesjö-Vocals/Guitars (Veni Domine, Audiovision)
Niklas Wilhelmsson-Bass/backing vocals (Disciples and Bishop Caps)
Thomas Weinesjö-Drums/backing vocals (Veni Domine, Saviour Machine, Audiovision)