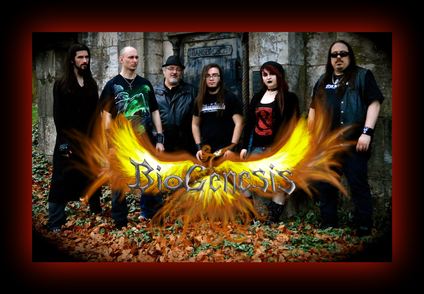 BioGenesis was formed back in 1996 in Dayton, Ohio by frontman-Chaz Bond(Jacob's Dream/Human Paradox). BioGenesis is a Hybrid Metal band that produces their unique sound by combining "Metal DNA" from various genres like Thrash, Heavy Metal, Progressive Metal, Symphonic, Power Metal, & Death Metal ever so slightly seasoned with Black Metal. The original band was comprised of Frontman-Chaz Bond, Guitarist-James Riggs, Guitarist-Paul Witte, Bassist-Randy Walton, & Drummer-Nevin Cline. Thanks to a review at Angelic Warlord we have insight into the meaning behind the band's name: "It is a scientific law that states that "Life is only reproduced by other living things".   It's not a popular term among atheists." - Chaz Bond.
In 2001 BioGenesis stepped onto the Metal scene with the release of their debut album 'The Mark Bleeds Through' which was brought to life at Rowe Productions. Shortly after their debut release, the band decided to split up with members going their separate ways resulting in a 5 year hiatus. In 2005 lead Vocalist-Chaz Bond joined the talented band Jacobs Dream as frontman for their third album-'Drama Of The Ages'.
In 2006 BioGenesis reformed with the original line-up and the band once again took the stage to do a few reunion shows in the local area of Dayton, Ohio. Shortly there after, the band began work on their follow up sophomore album titled 'The Rise, The Fall, The Rebirth' which wouldn't see completion for an additional 6 years. To the delight of their fans, 'The Rise, The Fall, The Rebirth' was finally released in 2012 on Sound Mass Records. 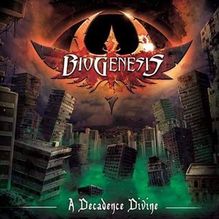 2017
In 2017 BioGenesis decided to wake up the Metal community with their hard hittin' third full-length release titled 'A Decadence Divine'. With this release, the band chose to go with a new label and went with the well respected Roxx Records Label. The album's eye catching cover art was designed by graphic designer Tim Murray. 'A Decadence Divine' finds the band delivering up what is arguably their strongest release to date. However, this third release didn't come without a few changes to their original line-up with Guitarist-Luke Nealeigh replacing Paul Witte, Bassist-Dan Nealeigh replacing Randy Walton, and Drummer-Majennica Nealeigh replacing Nevin Cline. This junior album also saw the addition of a new band position being filled by Keyboardist-Sam Nealeigh. with an almost completely new line-up, the band is poised to take the Metal realm by storm.
With this release there are a couple of special tracks that stand out and deserve mentioning. Track 9 is a cover of Phil Collins' 80's tune "Land Of Confusion" where BioGenesis morphs this radio friendly track into a full-on Metal assault. Track 12 is a CD only bonus track which Chaz had the following to say about: "Silence is about my daughter and her autism... she's mostly non verbal... but I also wrote these lyrics for other parents with children who have autism or other disabilities." 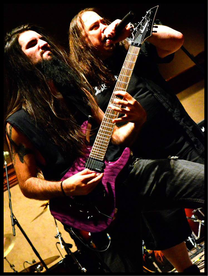 This release finds lead Vocalist Chaz Bond in top form delivering up everything from soaring vocals to heavy raspy deliveries both coupled with some sick blood curdling screams. Listening to this 2017 release, there are times when Chaz brings to mind such vocalists as Jimmy P. Brown(Deliverance), Eric Clayton(Saviour Machine), and even Kevin Ayers(Haven). 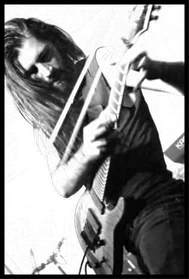 Guitars are handled from a duo approach with Luke Nealeigh on Lead Guitars & James Riggs on Rhythm Guitars. Luke and James unleash an array of guitar styles ranging from Driving riffs to Power riffs to Thrash to 80's/90's noodling and even touching on some modern techniques,
Not only is Bassist-Dan Nealeigh the Owner of D.A. Music Studios he is the dad of three other members within the band as well - Luke, Sam, & Majennica Nealeigh. Throughout this disc, Dan holds up his end and helps keep things heavy with his timely Bass lines.
With the addition of Keyboardist-Sam Nealeigh the band's sound is given an epic quality mostly due to his Symphonic touches coupled with some timely piano play. The Piano plays a big part on this release adding excitement and anticipation for what's coming next often bringing to mind such great offerings from artist keyboardist-Jonathan Cain(Journey).
Time is kept by percussionist-Majennica Nealeigh where what we find is nothing short of a Metal feast with plenty of time changes drawing one back for repeat listens. There are injections where Majennica puts the pedal to the floor with some killer double-bass pedal action. Thrash fans are in for a treat here because there are plenty of moments where the "hammer pounding" technique emerges and the skins are relentlessly punished making this listener very happy.
In a review at Daily Advocate Dan Nealeigh stated:  “We get to go places with others playing metal,” Dan said. “Some people feel if you play this stuff, you have to be anti-christian. That is not true. It is our way of being the light in dark places.”
Lyrics are thought provoking as one can see here:
"Tears Of God"
As He looks upon this corruption; of His own creation
He waits for eyes to see
An atheistic indoctrination
Flows through the veins of our children
Will their eyes ever see; will their eyes ever see
The beast is free to run; as the lies run through our blood
Violence, murder; the devil's gospel has begun

We have become all about ourselves; as the seeds of un-forgiveness grow
And we will know just what we sow
Greed and lust are forever more; history repeats, just like before
Close your eyes and follow me
As the legions lead us into the dark; the mirror's image begins to fade
From behind the mask they will persuade
To gain the world, we lose our souls
As foretold in the ancient scrolls; the gates of hell are open wide

A godless age has lead us here
Replaced our faith with primal fear
Suicide, genocide
No purpose to live, no place to hide

Seeds of darkness; breeding hatred; in a world gone wrong
Loss of innocence leads to twisted minds; in the labyrinth of lies 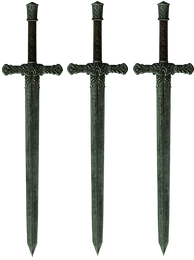 (See Site Info for Sword Scale meaning)
This 2017 release is not for the faint of heart and could very well administer a debilitating blow to the lower jaw of the unsuspecting listener. For those who have forgotten just what fist poundn' head bangn' Metal sounds like, we are happy to reintroduce you to Metal forged the old fashion way - by hammer & anvil.
If you are into bands like Titanic, Haven, Deliverance, Saviour Machine, Disturbed, or Megadeth then there's plenty to get excited about here with BioGenesis' third release 'A Decadence Divine'.
​
'A Decadence Divine' can be purchased at the following sites:
cdbaby (11 tracks):
store.cdbaby.com/cd/biogenesis1
iTunes (11 tracks):
itunes.apple.com/us/album/a-decadence-divine/id1243724712
Amazon;
www.amazon.com/Decadence-Divine-BioGenesis/dp/B071LQKG1V
Musicians:
Chaz Bond-Vocals
Luke Nealeigh-Lead Guitar
James Riggs-Rhythm Guitar
Dan Nealeigh(Owner of D.A. Music Studios)-Bass
​Sam Nealeigh-Keyboard
Majennica Nealeigh-Drums