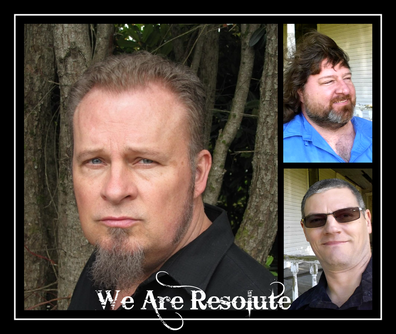 'We Are Resolute' is a Heavy Metal band from Michigan that formed back in 2016 by ​John Mokma & Bryan Carman. Before 'We Are Resolute' was formed, the group cut their teeth in a band called 'Otherwise Broken' which had a long run from 2001 - 2012. Bryan Carman explains the meaning behind the band's name: "To be Resolute, is to be focused upon a goal, determined, etc. And it has the WAR acronym because we are in a spiritual war."-​ Eph. 6:12
After the band's conception, W.A.R was still in need of a lead vocalist so Bryan began scrolling through facebook for someone who could fill the position. It wasn't long before he discovered that Dale Thompson(Bride) had offered up his vocals for hire. Immediately, Bryan knew that he was the one they were looking for and without hesitation he contacted Dale who promptly came on board. Dale Thompson is originally from Kentucky but now resides in New Zealand. Over the years, Dale has fronted a number of bands including 'Bride', 'Perpetual Paranoia', 'The World Will Burn', 'The Thomas Thompson Earth Project',  'Haunted No More', and of course 'We Are Resolute', just to mention a few.
​Christian rock band in Michigan whose aim is to use music to draw people to the knowledge of Jesus.
​For those who know Him, encouragement and for those who don't, a light unto their hearts! 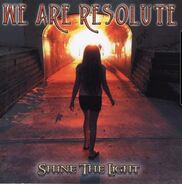 2020
In 2020 'We Are Resolute' released their debut full-length album titled 'Shine The Light' on Roxx Records.  'Shine The Light' was 4 years in the making and includes 10-tracks with a total running time of 42 minutes. Recording was managed by the band's very on John Mokma while Bryan Carman handled all the song writing, art, and social media. A few of the tracks were mixed and mastered by the well known guitarist-Rex Carroll(Whitecross) including "Kingdom of Heaven", "Your Enemy" and "Mad at God". The rest of the album was managed by John Mokma who did the album's first mix. Garret Thomas of 'The Thomas Thompson Earth Project' did the album's second mix and mastering was done by Rob Colwell of Roxx Records. I must say that the production on this album is top notch.
The album's cover art photo was taken by a friend of Bryan's at a state park in Michigan called Tunnel Park. ​The band takes the idea for the album's title cut-'Shine The Light' from the scriptures as seen in Matthew 5:16 "Let your light so shine before men, that they may see your good works, and glorify your Father which is in heaven."
Even though there is some distance between the group and their lead singer, 'We Are Resolute' has developed an interesting way of working together to acquire the desired outcome that they are looking for in their music. Guitarist-Bryan Carman does a rough recording of himself singing each track and then sends the recordings to the lead vocalist-Dale Thompson. When Dale receives the vocal recordings in New Zealand he is able to gain an understanding of what the band has visualized for the vocals of each track and is then able to take the concept and run with it making it even better.
This album features some of the best vocal work I have ever heard from Dale. From track to track, Dale captures the magic of the 80's with his delivery moving in and out from a cleaner vocal delivery to a raspy heavier vocal delivery which allows for more hooks, surprises, and dynamic moments within the arrangements. 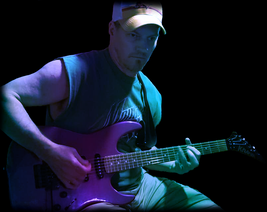 The lead guitarist for We Are Resolute is co-founder/axeman-​Bryan Carman. Bryan's guitar play on this 2020 album is best described as an 80's Metal feast. The guitars are varied from track to track featuring different styles of play reminiscent of that which was found during the golden years of Metal music. The guitars are a breath of fresh air perfectly supporting & accompanying the vocal work of frontman-Dale Thompson.
Lyrics are Christ centered as one can see in the following excerpts:
"Inside"
You can run, but you can’t hideTry to hide what’s inside
You can lie, but God will find
Don’t fool yourself, cause God’s not blind
You can’t hid what’s inside
What you need to do is run the race
Run so you can win
Holding fast to what you believe
And as you run, keep praying

"Your Enemy"
In the end he’ll take power
Only for a moment’s time
Those who take the mark upon them
Will meet their bitter end
The trump will sound and into glory
We will reign with Jesus then
No more tears, no more sorrow
And His face we will see

(See Site Info for Sword Scale meaning)
'We Are Resolute' has hammered out a solid slab of Metal with their debut album 'Shine The Light'. If you are a fan of the 80's Metal scene and are looking for some music in the veins of Bride, Rage Of Angels, or even Guns N' Roses then you are going to love what this international band has delivered up. Help support faith based Metal by purchasing your copy of the band's debut today! Also, don't forget to check out the interview I had with the band.
Purchases can be made at any of the following links:
Roxx Records
Amazon
Apple
Musicians:
Dale Thompson(Bride) - Lead Vocals
Bryan Carman - Guitars
​John Mokma - Bass & Drums

Guest Musicians:
Lydia Carman - Additional Vocals on "Kingdom Of Heaven" & "We Will See Him"