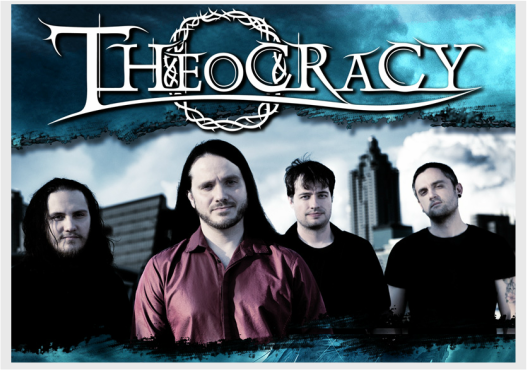 Theocracy originally formed back in 2002 by Matt Smith in Athens, Georgia USA where the band was entirely a one man show with Matt handling all instruments except drums. Theocracy's debut album was released at the end of 2003 on Metal Ages Records to fantastic reviews and worldwide acclaim within the metal community. However, the drums were produced on a drum machine which is often frowned upon in the Metal realm. Since then, in 2013, Smith decided to remix the album with Drummer Shawn Benson behind the kit giving the album a more professional sound. Shortly after the 2003 debut release, Theocracy began to grow as they became a household name in the Metal community and was able to quickly add members to the band with Matt managing the guitar from behind the mic along with additional help on the guitars from Jon Hinds, and percussionist Shawn Benson behind the kit.
Over the years, Theocracy has been actively producing some of the hottest Metal slabs in the Metal realm with 4 full-length releases to date. In 2003 they released their self-titled debut album, then in 2008 they released their highly anticipated follow up 'Mirror of Souls'. In 2011 they took the world by storm with the release of their magnum opus 'As The World Bleeds' which hit the Billboard Heatseeker Chart at #40 in the U.S. and received a fantastic response around the world. In 2013, to the excitement of fans around the world, Theocracy remastered their 2003 self-titled album and re-released it making it possible to obtain this once rare and hard to find release. Then in 2016 the band released their fourth master piece simply titled 'Ghost Ship'.
Concerning the band's moniker, Matt Smith stated on Rock Overdose "that the word "Theocracy"  means a government ruled by God. But we use it differently-nothing to do with governments and politics, but a life ruled by God." 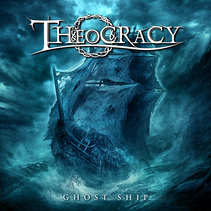 2016
In 2016 Theocracy released their fourth full-length follow up album to 'As The World Bleeds' brilliantly titled 'Ghost Ship'. This 2016 release was produced, engineered, and mixed by Matt Smith and then mastered by Vlado Meller and released on the Ulterium Records label. The timely release of their 4th album finds Theocracy not straying from their trade mark epic Power Metal sound that the band has become famous for. The album's cover art was done by none other than Felipe Machado Franco who has also worked with such bands as Blind Guardian, Rhapsody of Fire, and Iced Earth. I believe that the cover art fits well with the epic feel to this album where one can't help from being reminded of the epic Holly wood film 'Pirates of the Caribbean.' The Tune "Ghost Ship" is an allegorical picture of the story of the dead bones coming to life which is found in Ezekiel 37:1-14 . The Captain is the Lord and we are given the command to go and reach the lost so that they can board the ship of the Lord Jesus. "All the world's unwanted come aboard and leave your darkness behind. Desperate to count, redeem the time. We are the ghosts awakened to the light forged and branded in His name. Ancient workmanship before ordained"
​       'Ghost Ship' was produced and engineered by frontman Matt Smith at his studio in Athens, along with a farmhouse that the band converted into a recording space. Matt had the following to say about the album's inspiration: “We’ve been so inspired and moved by the people we’ve met on the road after shows over the last few years, and many of their stories will stick with us forever,” says Smith. “This was on my mind when creating this album, and I hope these songs will be a real encouragement for the struggling, the broken, and the misfits looking for a place to belong.  I think that thread of hope runs throughout this record.” 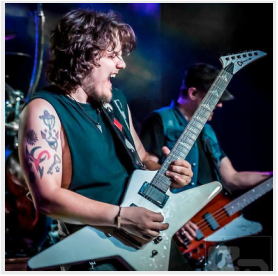 One might ask how does 'Ghost Ship' compare to previous Theocracy releases? That is a question worth exploring and giving some thought to. First off , 'Ghost Ship' is epic and very energetic to say the least bringing to mind their 2008 release 'Mirror Of Souls'. Then there's a more overall heaviness to 'Ghost Ship' that is similar to what's found in tracks from the band's earlier albums like "Laying The Demon To Rest"(Mirror Of Souls) or even "Nailed" off (As The World Bleeds). Vocalist Matt Smith continues to inspire as he reaches high and lower ranges in his delivery. There's a definite difference in Matt's vocals on their debut in comparison to the three albums that would follow it. However, on 'Ghost Ship' Matt's delivery is better than ever not straying far from what is found on 'Mirror Of Souls' or 'As The World Bleeds.'  The backing vocals are similar to previous releases in that they take the form of choir vocals not unlike what we have seen with the well known band Stryper. Another interesting consistency between albums is the many time changes in each tune. With the ability to mix things up Theocracy keeps things interesting with each play of the disc. The line-up hasn't change between 'As The World Bleeds' and 'Ghost Ship' with the band consisting of frontman Matt Smith, Lead Guitarist-Val Allen Wood, Guitarist-Jonathan Hinds, Bassist-Jared Oldham, and Drummer-Shawn Benson. Ghost Ship has a slightly heavier more aggressive feel to it than earlier releases. Although including their traditional trade-mark fast Power Metal riffs, there's more Thrash Metal permeating throughout this album than ever before. We're talking about the kind of Thrash that throws you up into the air and then punches you in the mouth on your way back down. Some of the Thrash guitar shredn, as heard in the track "The Wonder Of It All", reminds of the guitar work found in various arrangements from the well known Thrash band Tourniquet. However, as one is thrashn about they began to realize that this tune isn't just another heavy track as the message of hope is presented: "You will never reach as high as heaven's door. You could never build a bridge to Me. Your greatest acts are filthy rags. But grace alone is free so rest in Me."
Theocracy is known for their tracks often extending way past the normal 4 to 5 minute range. For example, on their debut release, there are three tunes that extend over 11 minutes "The Serpent's Kiss" , "The Healing Hand" , and "Twist of Fate". On the album 'Mirror of Souls' there's the 9 and a half minute tune "Laying the Demon to Rest" and then there's the title track-"Mirror of Souls" which clocks in at over 22 minutes. On the band's third release "As the World Bleeds," there's the opening track "I Am" which clocks in at 11 minutes. With the release of Ghost Ship, Theocracy keeps this tradition alive with the tune "Easter" which clocks in at almost 10 minutes. Even though some of their tracks can be a bit lengthy, the band has a way of keeping your interest mostly due to the band's ability to mix things up with many time changes and solos.
From track to track the lyrics are thought provoking and convey wisdom through a whole
​variety of topics ranging from warnings
to salvation to spiritual revival to security in Jesus, along with the resurrection story and more.
The following is a small glimpse into the lyrics of the tune "Easter":
"Easter"​
Glory! Glory! Hope is alive
And lifted up, before your eyes
Waking all the world, open gates to paradise
Now it's done, life has come
Death has died
Easter glory, what an ending to the story
My Son, arise! 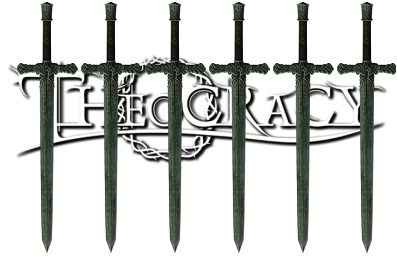 (See Site Info for Sword Scale meaning)
​       For those whom are hungry for more Power Metal- the feast is set and what lies before you is a fresh slab of Molten Metal of the finest quality. The question is where will you be dining tonight?  This 2016 release is without question Theocracy's heaviest offering to date and is by no means recommended for the faint of heart. If your speakers are starting to show signs of their age then you might want to consider having a new set on hand because this release is guaranteed to inflict casualties as it brings the hammer down.
Look for Ghost Ship to be released on October 28th, with a new European tour to follow in November. The following is a pre-order link:  ULTERIUM STORE
Musicians:
Matt Smith-Vocals
Val Allen Wood-Lead Guitars
Jonathan Hinds-Guitars
Jared Oldham-Bass
Shawn Benson-Drums