It takes a lot of faith to be an Atheist.
WND Exclusive:
In June 2003, WND interviewed Bible enthusiasts who dove the waters of the Red Sea, alleging they found and photographed parts of chariots that may be the actual remains of the catastrophe brought upon the Egyptian army which pursued the Israelites, according to the Book of Exodus in the Bible.
“I am 99.9 percent sure I picked up a chariot wheel,” said Peter Elmer, a forklift mechanic from Keynsham, England, who made two diving trips to the Gulf of Aqaba branch of the sea. “It was covered in coral.”

“I believe I actually sat in an ancient chariot cab,” he told WND at the time, referring to his time exploring a submerged item in the underwater junkyard. “Without question, it is most definitely the remains of the Egyptian army.”
Read more at http://www.wnd.com/2012/06/chariots-in-red-sea-irrefutable-evidence/#cYZKweoflJP7sW9Q.99

Egyptian chariot wheels had different designs depending on the year they were made. The ones found in the Gulf of Aquaba are in keeping with the time of the Moses account in the bible.Wyatt claimed to have retrieved one of the wheels and said an Egyptian authority declared that it was from the 18th dynasty of Ancient Egypt.
Repeated dives in depths ranging from 60 to 200 feet deep (18m to 60m), over a stretch of almost 2.5 km, has shown that the chariot parts are scattered across the sea bed. Artifacts found include wheels, chariot bodies as well as human and even horse bones. Some divers have located wreckage on the Saudi coastline opposite Nuweiba as well.

Since 1987, Ron Wyatt found three 4-spoke gilded chariot wheels and he claims that Coral does not grow on gold, hence the shape has remained very distinct, although the wood inside the gold veneer has disintegrated making them too fragile to move.

WHEN Ron Wyatt first visited Nuweiba in 1978, he found a Phoenician style column lying in the water. Sadly, the inscriptions had been eroded away, hence the column's importance was not understood until 1984, when the discovery of a second granite column was reported on the Saudi coastline opposite -- identical in appearance to the first, only on this one the carvings were still intact and readable.

In Phoenician letters (Archaic Hebrew), it contained the words: Mizraim (Egypt); Solomon; Edom; death; Pharaoh; Moses; and Yahweh, indicating that King Solomon had set up these columns as a memorial to the miracle of the crossing of the sea. Saudi Arabia does not admit tourists, and perhaps fearing unauthorized visitors, the Saudi Authorities have since removed this column, and replaced it with a flag marker where it once stood.

THE Gulf of Aqaba is very deep, in places over a mile (1,600m) deep. Even with the sea dried up, walking across would be very difficult due to the extremely steep grade down the sides. But there is one spot where if the water were removed, it would be an easy descent for people and animals. This is the section between Nuweiba and the opposite shore in Saudi Arabia. 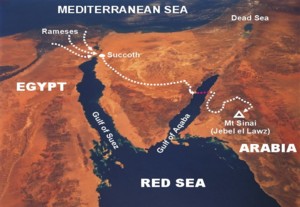 THE EXODUS ROUTE - With the correct crossing site in the Gulf of Aqaba
Scientific(Observation) Depth-sounding expeditions have revealed a smooth, gentle slope descending from Nuweiba out into the Gulf. This shows up a lot like a pathway on depth-recording equipment, confirming it's Biblical description "...a way in the sea, and a path in the mighty waters." (Isaiah 43:16). 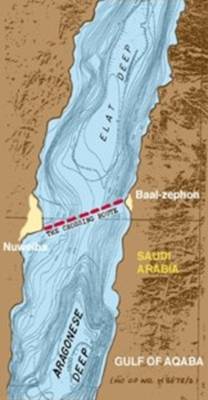 In order for them to be "entangled in the land," they would have to be traveling through an area of wadis (canyons)
with high mountains all around, which would seem to hem them in.
This takes place prior to crossing the sea.
Knowing this, we have to look for an area which would terminate on a beach or shore of the sea,
and which was large enough to hold at least 2 or 3 million people, as well as their flocks.

there is a beach of tremendous size on the Gulf of Aqaba at Nuweiba,
The beach is 4.25 miles long by 2 miles wide.
It appears clearly on satellite pictures, and is the only site that matches all points of the Bible account

The only entrance to the beach at Nuweiba is through an 18 mile long wadi system called - Wadi Watir.

Josephus gives an additional bit of information in his "Antiquities of the Jews" Book II, Chapter XV:
Speaking of pharaoh's army pursuing the multitude, he states:

" Now when the Egyptians had overtaken the Hebrews, they prepared to fight them,
and by their multitude they drove them into a narrow place;
for the number that pursued after them was six hundred chariots,
with fifty thousand horsemen, and two hundred thousand footmen, all armed.
They also seized on the passages by which they imagined the Hebrews might fly,
shutting them up between inaccessible precipices and the sea;
for there was on each side mountains that terminated at the sea,
which were impassable by reason of their roughness, and obstructed their flight;
wherefore they there pressed upon the Hebrews with their army,
where the ridges of the mountains were closed with the sea;
which army they placed at the gaps of the mountains,
that so they might deprive them of any passage into the plain ..." 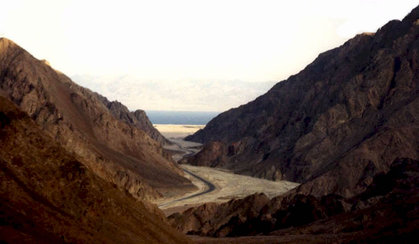