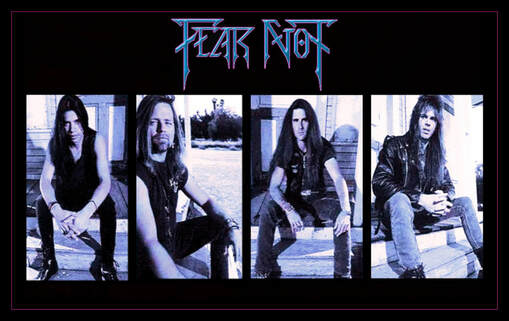 Fear Not is a Melodic Hair Metal band that formed in Los Angeles, California back in the early 90's. Fear Not draws comparison to well known bands like Skid Row, Siloam, Guardian, and Slaughter. The band takes the idea for their moniker from scripture like Isaiah 43:1 "But now thus saith Jehovah that created thee, O Jacob, and he that formed thee, O Israel: Fear not, for I have redeemed thee; I have called thee by thy name, thou art mine."
In the early 1990's, before the band's conception, members cut their teeth in another Hair Metal band called Love Life. In 1991 Love Life released their full-length album titled 'Good Bye Lady Jane' on Blonde Vinyl Records with their arrangements drawing comparison to Skid Row and Slaughter. Love Life's line-up included lead vocalist/guitarist-Larry Worley, lead guitarist-Darin Eby, bassist-Rod Romero, and drummer-Gary Hanson. For the most part, the lyrics on 'Good Bye Lady Jane' are not overtly evangelical however, there are some moments like in track-11 “Do You Believe In Love” - "High upon the mountain, Looked to the sky above, Put my hand in the air, Reached out for His love, Now I don’t believe in money, Cant’ believe in fame, Can’t believe in riches, I just believe in His name, Do you believe in love?"
like many other christian Metal groups of the time, Love Life's debut did not get the exposure that the band was hoping for even though their album was a solid effort. Shortly after the release of 'Good Bye Lady Jane' Darin Eby left the band and was replaced by guitarist-Chris Howell. At this time, the band decided to change their moniker to 'Fear Not' and began working on a new heavier album under the direction and leadership of the Elefante brothers. 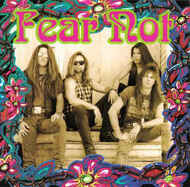 1993
In 1993 Fear Not released their debut full-length self-titled album on Pakaderm Records. The album was produced by the famous brother team - John & Dino Elefante. Their debut release quickly captures the listener's attention with its melodic 80's Metal AOR sound, commercial hooks, powerful lead vocals, and spot on production from the Elefante bros. The band's debut quickly garnered the group some needed exposure allowing them to take their show on the road and even open for some well known acts like Bride, Guardian, Deliverance, and Barron Cross.
Listening to vocalist-Larry Worley's energetic & powerful delivery brings to mind a number of well known vocalist in the Metal realm like Sebastian Bach(Skid Row), Lee Guthrie(Siloam), and even Mark Slaughter(Slaughter). 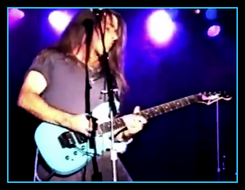 Shredder-Chris Howell(Red Sea) shares the stage with frontman/axeman-​Larry Worley with both Chris & Larry handling lead guitar rolls at different times. Throughout this release, Chris and Larry deliver up some driving riffs along with a number of memorial solos that are reminiscent and typical of the era.
After having released such a strong solid debut album, one would suppose that the band went on to certain stardom with their follow-up release. However, with the 90's Grunge scene taking over and snuffing out any attempts to release Melodic Metal, Fear Not's band members went there separate ways. 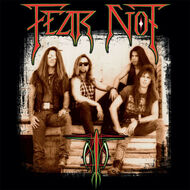 2017
In 2017 the band's 1993 debut was remastered by Rob Colwell of Bombworks Sound with new cover art designed by Scott Waters(Ultimatum) for No Life Til Metal. Gone are the flowers of their original album's cover art as one can see above. This 2017 remaster was mixed by Dino Elefante and reissued by Roxx Records. The album comes complete with the original 10-tracks along with two additional bonus tracks "You've Got Love" and "Love Is Alright".
It's worth mentioning that in 2017 Roxx Records also released, for the first time ever, the band's 1993 debut album on vinyl complete with all 10 original tracks.
With the release of Fear Not's debut album we see
the band moving in a better direction with stronger more evangelic lyrics
​than their early days as seen in the following excerpts:
“We Have A God”
Waiting for the tumble
Standing on the fault line
Heading out of bounds
Running of game time

We found a love straight from the top
And it’s coming down, aint’ going to stop


"Mr. Compromise"
Caught In The World Or Lies And Make Believe
Living The Life Of Someone Else
Lost In A Dream Of How You Think It Could Be
Are You Just Lying To Yourself
And Your Salvation's Crying
You Know, You Know
They'll Be No More Denying
All These Voices In Your Head...

(See Site Info for Sword Scale meaning)
In the summer of 2018 a group of die-hard 'Fear Not' fans invited the band to their church to rehearse for a weekend and it's there that the group realized they still had a calling and needed to do something. The band got to work recording new material and in 2019 Fear Not released a 5-track EP titled 'For The Wounded Heart' on Roxx Records. With this EP release there was a huge line-up change in the vocal department with original frontman-Larry Worley being replaced by vocalist-Eddie Green(Even The Dogs). Larry Worley is still with the band but has moved to the guitar section & backing vocals. Original guitarist-Chris Howell returns on lead guitar along with bassist-Rod Romero and drummer-Gary Hanson. Gone is the group's notorious Arena Rock/Metal sound with the band now sailing into Modern Hard Rock territory which is mostly accomplished through the vocal work of Eddie Green along with some modern guitar techniques. On this 2019 release, frontman-Eddie Green delivers up a strong heart-felt performance. If one goes into this expecting the band's original sound then you will be greatly disappointed. However, if one listens to the project with an open-minded approach and analyses just what is presented here then you will find a strong solid offering by the band.
Fear Not comes highly recommended for fans of 80's acts like Skid Row, Tesla, Siloam, and Guardian. If you are looking for some solid Metal to add to your collection that will keep you coming back for more then you are going to love what this band has offered up with their debut release.
Musicians:
Larry Worley - Lead Vocals & Guitars
Chris Howell(Red Sea) - Guitars
Rod Romero - Bass
Gary Hanson - Drums
​
Additional Musicians:
E.L. McNeely - Bass